A Brief Overview of Brain Cancer in Pets

A Brief Overview of Brain Cancer in Pets 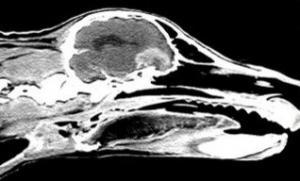 Brain cancer in pets is especially dangerous because it has the ability to remain unnoticed, even after a multitude of blood tests, other bodily examinations, and sometimes CT scans. As with other types of pet cancer, it is imperative to learn more about it in order to elongate the lives of our companions and to have a further understanding of cancer in humans. Many articles about brain cancer can be difficult to understand and tend to be extremely lengthy. However, they contain vital information regarding the identification of brain cancer in pets. Thus, I have written a relatively concise summary about the basics of pet brain cancer.

Prior to understanding the fundamentals of brain cancer, it is important to be familiar with the basic structure of the brain itself. In simplest terms, a canine’s brain can be divided up into four sections – the forebrain, the cerebellum, the brainstem, and the origin of the spinal cord. The forebrain controls the final behavior of the dog as well as the final integration of sensory information. The cerebellum controls the dog’s coordination and works in tandem with the vestibular system (the sensory system) to maintain balance and posture. The brainstem regulates motor function, wakefulness, and manages the cardiovascular and respiratory systems. Finally, the origin of the spinal cord controls voluntary and involuntary reflexes.

Brain tumors are not only tumors that originate in the brain. A primary brain tumor is one that does whereas a secondary brain tumor is one that originates in another part of the body and spreads to a region of the brain. The latter carries an extremely poor prognosis due to the confirmation of a malignant tumor already in several locations of the body, including the brain. However, the former is also dangerous and life-threatening. Brain tumors are especially dangerous because they are cancerous tumors that also affect the patterns of the brain by compressing it or by disrupting the actions of the various parts of the brain. Consequently, bodily functions and behavioral abilities can be dramatically altered or even shut down.

The most common primary brain tumor amongst humans and dogs is a meningioma. This tumor originates in the arachnoid mater of the meninges of the brain. In other words, the malignant tumor is formed by the growth of cancerous cells in the outer membrane of the brain. Compared to other primary brain tumors, meningiomas are relatively slow growing but have the ability to be very malignant. They are most common in long-nosed breeds such as the golden retriever. Another primary brain tumor is a glioma. This tumor originates in the supporting cells of the brain and includes astrocytomas, oligodendrogliomas, and glioblastomamultiforme. Contrary to meningiomas, gliomas are common in short-nosed breeds such as the boxer, the Boston terrier, and the French bulldog. Moreover, a choroid plexus papilloma is a cancerous tumor that originates in the choroid plexus. Even a microscopic choroid plexus papilloma can be lethal because it blocks the drainage of cerebrospinal fluid (CSF) which can dilate a lateral ventricle, a concentrated area of fluid that separates the brainstem from the forebrain.

The effects of brain tumors vary by type of tumor and the location of the brain that is affected. Tumors located in the forebrain can cause loss of learned behavior, depression, change in appetite and thirst, or constant pacing and circling. A tumor in the brainstem can cause loss of balance, weakness on one side of the body, difficulty swallowing, change in voice, or the inability to move the eyes. More serious effects of a tumor in this location can be paralysis or an inability to control the breath. Lastly, tumors located in the cerebellum can cause hypermetria, intention tremors, swaying of the trunk, or a wide-based stance.

An aspect of brain tumors that makes them especially life-threatening is that they are difficult to identify. It is essential to use an MRI or a CT scan because brain tumors rarely appear on standard radiographs. In fact, some tumors of the brain do not appear on CT scans. There are many challenges that pets, their owners, and veterinarians face when attempting to perform an MRI or a CT scan. In order for these procedures to work properly, the pet must be under general anesthesia. Also, MRIs and CT scans are not widely offered and cost large amounts of money. In addition to these two procedures, a biopsy must also be performed in order to establish the type of tumor and to grade the malignancy of the tumor.

Each type of brain tumor has its own type of treatment that is considered to be most effective. However, chemotherapy is not widely accepted as an effective treatment for brain cancer because the drugs involved do not have the ability to penetrate the blood brain barrier, making it nearly impossible for the drugs to kill the cancer cells. New drugs have been created that have the ability to “cross” the barrier and are currently being tested on humans and pets.