“Canine statue to be dedicated at Short Pump Park”

By Jocelyn Grzeszczak, Special to the Citizen

In collaboration with FETCH a Cure, Henrico County Recreation and Parks Aug. 11 will reveal a red steel dog sculpture that will be placed directly outside of the fenced-in dog park.

FETCH a Cure is a Henrico-based nonprofit organization that works to improve the quality of life for pets by spreading awareness about pet cancer, which affects an estimated six million dogs and six million cats each year.

The statue, which is a part of the Steel Dog Project, will join approximately 200 other steel dogs in the Virginia, Maryland and D.C. area as a signature part of FETCH’s pet cancer awareness campaign.

“When people see them, they’ll be reminded of pet cancer and that there are resources out there,” FETCH’s Associate Director of Development Sarah Moseley said. 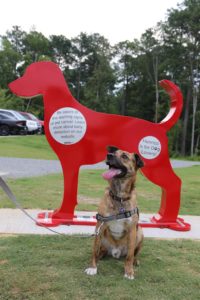 To begin the process of installing the statue, FETCH first reached out to Recreation and Parks and suggested Short Pump Park as a potential location, Recreation and Parks Marketing Specialist Pam Kempf said. The park, which is located on Pump Road, has become a popular spot for both families and their pets, she said.

This will be the organization’s first sculpture in a public dog park; previous steel dog “litters” had been purchased by local businesses and individuals and were built on a smaller scale, Moseley said.

“Business owners and other places have theirs on wheels so they can be displayed however they want to, brought outside, brought back inside,” Moseley said. “But this one will be secured to a base, so it’s more of a permanent installation.”

The statue, measuring approximately four feet tall, four feet long and a foot wide, also will include signage with information about FETCH a Cure’s mission and how to contact the group.

The organization started in 2006 after founder Mike Holland’s dog, Hannah, was diagnosed with nasal osteosarcoma of the skull. Holland had trouble finding information about the disease and what he could do, so he created FETCH to raise awareness and educate pet owners about pet cancer.

One of the organization’s programs, Companions in Crisis, helps fund some of the treatment costs for pet owners who are unable to bear the financial burden of cancer treatment, Moseley said.

“Anyone with a dog or cat can know [that] even routine care gets pretty expensive,” she said. “We just like to give people hope when they get that scary diagnosis, and they know that we’re here as an option. Our mission is to build a community where no one is denied a choice for their pet’s health due to lack of options, education or funding.”

Through individual donations, annual events such as a charity gala and golf tournament, as well as the steel dog sponsors, FETCH is able to cover about 20 to 30 percent of pet cancer treatment costs for each recipient, Moseley said.

Henrico Recreation and Parks officials decided to get involved because of FETCH’s important and rarely-discussed message, Kempf said.

“It’s a positive thing that they’re doing for the families that are in Henrico and the Richmond region,” she said. “They educate people, they raise awareness about a topic that I don’t think a lot of people know about. It’s a really helpful message for our dog owners to hear about.”

To catch the first glimpse of the new installation, as well as learn more about FETCH and pet cancer education, attend the unveiling ceremony located in front of the Short Pump Park dog park. The event, which is free and open to the public, will take place Aug. 11 at 10 a.m.