Bourbon is a 9-year-old pitbull mix being treated for canine cancer (B cell lymphoma) by Dr. Monica Jankowski at Virginia Veterinary Centers. With the support of FETCH a Cure’s Companions in Crisis program, Bourbon’s family is fighting to give him a fair chance against canine cancer. Read more about this handsome boy and his family below: 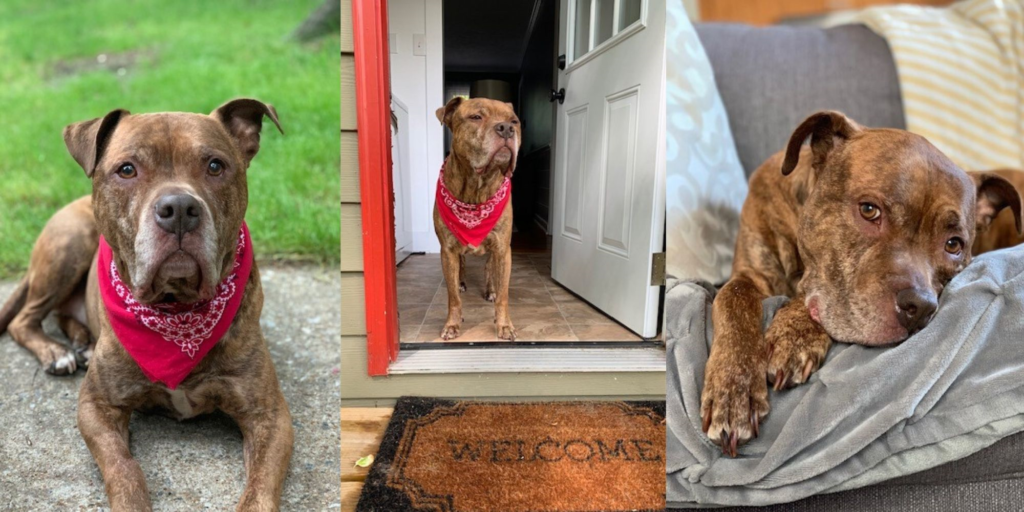 I’ve had Bourbon since he was roughly 11 weeks old when I purchased him off of Craigslist while a college student at Radford University. While at the time it may have been my biggest impulse decision, it was hands down the best decision I’ve ever made. He has been my best friend since I brought him home. He’s been with me through some of the most transitional phases of my life: through college graduation, a horrible breakup, my wedding to my husband last year, and most recently buying our first home in April.
Bourbon is the most stubborn, lazy, sweet, grumpy dog you’ll ever meet. We call him Eeyore because of how he mopes around…we think he does it for the kisses on his lips and for the extra butt scratches. Bourbon is a tester…he sees how far he can push and get away with and at times it’s definitely pushed him. Like the TWO times he ate a full rotisserie chicken out of the garbage can. And YES, this is how we found out he knows how to open a mechanical trash can with his big head. Or the time he jumped out of a moving car as a puppy. This is how we found out we only crack the window a little bit for him. Or the time he ate an entire bag of almonds and we learned by the look of his poop that he clearly doesn’t chew his food. And my personal favorite time — when we found out his love for paper products after chewing up my college diploma.
The 9 years I’ve had with Bourbon, and the 6 years my husband has had with him have been the best of our lives. Our friends with kids laugh at us and say “If you think you love your dog this much, wait until you have kids.” We don’t need to wait until we have kids because we already have one. Bourbon is our baby. Our big headed, droopy-lipped, frowny face, snuggly, chicken nugget, tooting baby.
It has been the toughest pill to swallow hearing that he has lymphoma, and to be honest, I don’t think it’s fully set in. I always joke that cloning would be figured out before Bourbon passed away and then we could live with him forever (we’re still hopeful). He’s the strongest boy. I KNOW IT. And I know that if he could just have the fair fight with treatment that we could have more time with him. Our hearts aren’t ready to say goodbye, and our bodies aren’t ready to give up the snuggles and kisses. He’s a fighter, and if a rotisserie chicken can’t take him down (twice) we refuse to let some stupid cancer.
July 29, 2020