FETCH a Cure’s Companions in Crisis program provides hope and options to families facing a cancer diagnosis with their cat or dog. On average, we fund 20 to 40 percent of lifesaving pet cancer treatments so pets like Kaylee can have a second chance at additional, quality time with the people that love them most. We’re so grateful to be part of Kaylee’s journey to overcome cancer through the Companions in Crisis program. Read more about this resilient pup below: 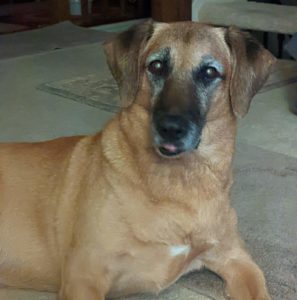 “Kaylee was brought to Virginia from Texas by her previous owner and then surrendered due to military deployment. Kaylee was immediately taken to Friends of Homeless Animals (FOHA), a no-kill animal shelter on acres of land.

After losing my last dog, Kobie, on October 13, 2012, at the age of 10, I wasn’t thinking about getting another dog because I couldn’t bear the loss of another pet, and I was entering a master’s program and needed to focus on school. The house was empty, and I fell into a deep depression. I started searching out rescue dogs and I went to FOHA’s website and found a few dogs I wanted to meet. Kaylee was the last dog on my list and when I entered the building, every dog was barking and jumping up except Kaylee. I took her for a walk, and she was so sweet and walked without pulling. I knew then I wanted to be her mom. I adopted Kaylee from FOHA on May 25, 2013. She was the bright light in my life that I needed.

These eight years with Kaylee have gone by fast and I treasure every single day with her. Every person who meets her says she is so sweet. In the last few years Kaylee has slowed down with shoulder injuries, lameness in her legs, panting often even in the cool house, and coughing and gagging. On July 5, 2022, Kaylee had a seizure. After several tests and scans, Kaylee was diagnosed with a 10 cm mass in her liver that was bleeding into her abdomen, making her extremely weak, which caused the seizure. The mass was removed and surprisingly was benign. Scans also showed a 3 cm mass in her lungs, a 3 cm mass on her adrenal gland, and a 2.17 cm mass in her right pituitary gland. The lung mass is cancer.

Of course, I am devastated beyond belief that my sweet girl has so much wrong with her. She doesn’t deserve this. No dog deserves the diseases they get. As animal lovers, I know you understand what I am going through. I am praying I get a few more years with my precious, sweet girl.” 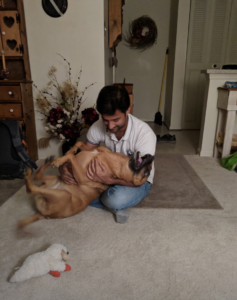