FETCH a Cure’s Companions in Crisis program provides hope and options to families facing a cancer diagnosis with their cat or dog. On average, we fund 20 to 40 percent of lifesaving pet cancer treatments so pets like Water Lily can have a second chance at additional, quality time with the people that love them most. We’re so grateful to be part of Water Lily’s journey to overcome cancer through the Companions in Crisis program. Read more about this beautiful kitty below: 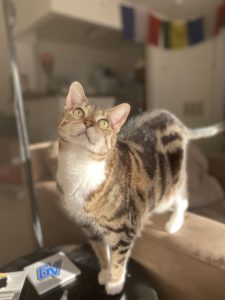 In January 2016, I returned to an empty apartment in Chicago unprepared for my spring semester of college. My roommates had moved out for study abroad, my fall semester had been full of difficult classes and over-commitments to clubs, volunteer organizations and friends. When I returned to school at the start of the semester, I immediately put down my suitcase, locked the door and went out to adopt a cat.

I adopted Water Lily from a cat only shelter in Chicago called Treehouse Humane Society. Initially, I was looking for a young cat around the age of two. They introduced me to Water Lily along with approximately eight other cats. I think they only introduced us because when we came in the room, she stuck her head out of a wicker basket; she was ten at the time, far outside the age range I was looking for. When they left me alone with all the cats, it was Water Lily that crawled into my lap for a cuddle and I knew I had to take her home. 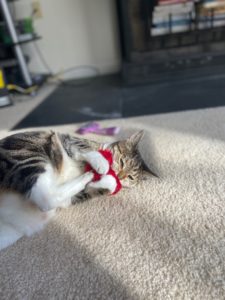 Water Lily quickly became my best friend. I would come home in between classes just so that we could cuddle on the couch. She was with me for college graduation, my transition into veterinary medicine from my previous career plans in law and human rights, and many more fundamental moments.

This year has been a tough one for this very special cat and while I am a veterinary professional as well as applying for veterinary school, I find it incredibly difficult not to get emotional when it comes to her health. I’ve cried to many veterinarians, in my car, and at work thinking about everything that she’s been through this year. When we found the lump in her armpit, it was fairly small. Since COVID-19 was at its peak and Water Lily was acting like herself, we did not rush her in. However, about a month later I became distressed with the size and insisted that we be seen. We decided to remove the mass in its entirety after the initial vet visit and unfortunately, the histopathology did not give us the news we had hoped for. 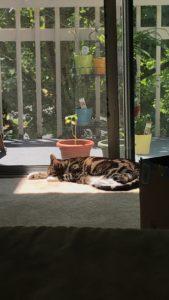 Since the mass has been removed, Water Lily has been acting like a normal, happy cat. She runs around the apartment, hops in and out of her cat tree, watches birds from her seat on the couch, and chats the day away. The prospect of losing my cat in a year due to the cost of radiation therapy is heartbreaking. Without radiation, it is my understanding that we will say goodbye in approximately a year. With it, we could have many more since she is in otherwise great health for a young adult cat.

Water Lily is my best friend. She is incredibly sweet, talks a lot, and loves it when her butt is rubbed. I bought a bird feeder just so she could watch the birds on the patio when I’m gone and she gets whatever she wants. Water Lily has more toys than my parents’ five cats combined! This diagnosis has hit us very hard but I can’t imagine my life without her right now. My hope is that radiation therapy will extend my best friend’s life and allow us to continue giving her the best life possible.