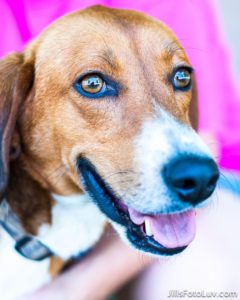 FETCH a Cure pulled Dwight, a sweet hound dog, from the Southside SPCA in 2016 and put him into one of the prisons in our Pixie’s Pen Pals program. Right away, his gentle and polite nature stood out, and he and his handler received Canine Good Citizenship certification, which the American Kennel Club considers the “gold standard of behavior for dogs in our community.”

Around the same time, Anita, a former occupational therapist, was grieving the loss of her beloved dog, Trudy. Trudy helped Anita when she suffered a life-altering illness in 2010, and had been by her side as she recovered. While she knew that no dog could replace Trudy, Anita was ready to adopt another furry friend.

“I met Dwight in the day room at the prison,” says Anita of the day she went to meet Dwight. “I watched as his handler proudly walked him around the room. Dwight’s eyes were soulful and sincere. He was tall and skinny, and loped around the room like a baby fawn. I already loved him.”
Dwight found a new home with Anita and her husband. Anita continued training with Katie Locks, the trainer who works with the inmate handlers in Dwight’s prison, and she passed the Canine Good Citizen test with him. Their training didn’t stop there, though. Given Dwight’s loving disposition, Anita knew Dwight had the potential to give back in a great way: being a therapy dog. 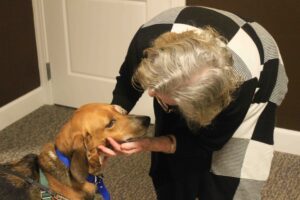 When Anita was in the hospital recovering from her illness in 2010, her family was constantly recruiting available therapy dogs to come to her room. She has always loved dogs, and their presence brought joy to her in an otherwise hard time. Anita experienced firsthand the positive effect dogs have, so when she adopted Dwight, she saw potential in him. “When my mom was ill, I noticed he would always sit by her and let her pet him constantly, and it made her feel good. I though to myself, ‘Dwight’s got a gift. Dwight could be a therapy dog.'”
Every Wednesday, Dwight dons his green harness and leash and accompanies Anita to The Pearl at Watkins Centre, a Memory Care facility. There, they walk around the center and visit with some of the residents. “His visits are anxiously anticipated by the residents and he is very well loved,” says Lynn Marchant, the Community Engagement Director of the facility. He joins them in the activity room and accepts pets, snuggles, and peanut butter from anyone who wants to be around him. 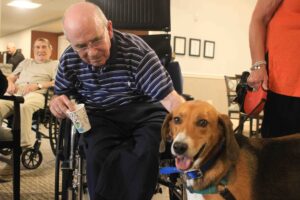 During their first visit in November 2018, Anita noticed that one resident in particular, Mr. M, was enamored with Dwight. “He kept petting him and asked me several times to bring him back again,” recalls Anita. The following week, while petting Dwight, he asked Anita what day it was. “Wednesday!” she replied. “Dwight comes on Wednesdays.” He grinned widely and responded, “Best day ever.”

Each week, Anita says, Dwight will lead her to the activity room and immediately walk up to Mr. M. She gives Mr. M a spoonful of peanut butter to give Dwight, a ritual that they both love. While Mr. M may not always remember the day of the week, his face always lights up when he sees his furry friend. He even has Dwight’s Christmas card (a picture of him with Santa) hanging up in his room.

Their visits are short to avoid over-stimulation for both Dwight and the residents, but Dwight is the star of the show when he is there. He even ends each visit by singing a song. We are so proud to see the incredible work that Dwight is doing!

Thank you to Anita, Dwight, Lynn Marchant, and the staff and residents of The Pearl for taking the time to work with us!

PS: You can follow Dwight’s life on his blog, Dear Dwight!