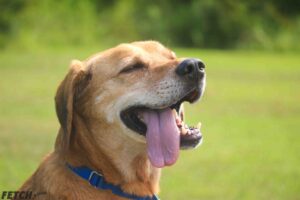 Bear, a Pen Pals dog, is currently receiving training at a Virginia Correctional Facility, and he’s ready for adoption! He is 70 pounds of pure love, and he’s looking for a forever home that will love him and shower him with attention!

FETCH received Bear from a vet’s office that rescued him from a less than ideal situation– he was kept in a pen for his first 9 years of life. Despite that, he has never met a stranger and is fantastic with older kids and anyone else he meets.

Bear is disinterested in dogs of his own size, but he LOVES small dogs. We don’t know what it is, but he’s all about them. He would do well in a home with a small dog with a big personality! Bear is interested in cats, but he doesn’t chase them. He has no interest in chickens (according to the family who fostered him when we first got him into our program!). 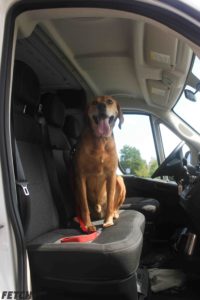 This past Wednesday, our Programs Manager, Sarah and our Marketing Coordinator, Allie took Bear out of the prison for a photoshoot. As soon as they got to the FETCH van, Bear jumped up into the high-riding seats with ease. “You wouldn’t guess he was an older dog based on his physical abilities,” says Allie. “I’m 23, and I have to use the handle to hoist myself into the seats. Bear is 63 [in dog years], and he didn’t even hesitate.” Once inside, Bear laid down on Allie’s lap while Sarah drove to a grassy area to take pictures.

Bear is grateful for every moment in life where he is being shown attention. He loves going new places, meeting new people, and smelling new smells! Once they got to the photoshoot area– a residential development next to a large pond– he was ready to go explore. Before getting out the camera, Sarah and Allie walked him around so he could get comfortable with his surroundings. It’s important to remember that Bear has been in a pen his whole life, followed by his time in our prison program, so he needs a bit of time to adjust to newer, larger, more stimulating environments. He gets comfortable quickly though, as you can clearly see in the photos and videos Allie took of him!

It’s also worth mentioning that Bear was excited to go back into the prison, too. His tail started wagging the second he saw his handlers again, and he was excited to see his pal Ollie, a beagle that’s also in the prison program.

Are you looking for a loving dog to give lots of TLC to? If so, Bear is the dog for you! You can fill out an application here. Please contact spavilack@fetchacure.com with any questions.