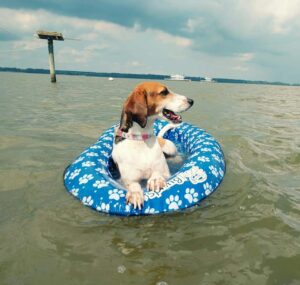 Cora’s life has been anything but ordinary. She spent the first 2 years of her life in a hunt club where she was mistreated and abused. After ending up in the pound, she was rescued by BARK, where she would go on to live for 2 years. She would cower in the corner of her kennel, trembling, tail tucked, head down and would refuse to eat. Adopters overlooked her, opting for other dogs. One person adopted her but returned her less than a month later. She seemed to give up and shut down.

“My heart dropped when I read her story online,” says Amy, Cora’s mom. “I knew I could be her miracle and give her a chance at a new life.” At the time, Amy was depressed and, like Cora, felt like she wanted to shut down. “Cora didn’t really seem that much different than me.” Cora and Amy leaned on each other. Amy patiently worked with Cora to make her feel safe, loved and cared for. Cora gave Amy love and support when she needed it. 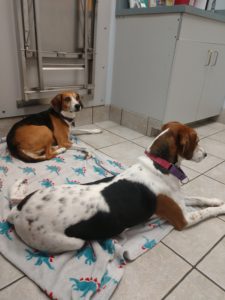 Recently, Amy felt enlarged lymph nodes in Cora’s cheek. They immediately went to the vet, where they confirmed Amy’s worst fears: Cora had high grade large cell malignant lymphoma. Amy knew they had to fight. “I called last summer her ‘first summer of freedom’,” she said. “My heart can’t accept that that could be her last.”

Cora had her first treatment on Thursday, February 20th at Virginia Referral & Critical Care. Knowing Cora’s past and fearfulness, they put her in a quiet, low-traffic room. Amy brought blankets from home and Cora’s cousin Dixie for comfort.

She was tired after treatment, but still acting like her normal, fun self. By Saturday, her lymph nodes had already decreased substantially in size. “Cora has survived so much in her life already, so I am hopeful she will survive this awful disease too,” says Amy.

We are so grateful to be able to help Cora and her family. Please send lots of good thoughts their way as she continues her treatment!
February 26, 2020