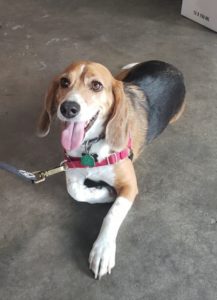 This past Saturday, we hosted a trivia night at Blue Bee Cider‘s Dog Days of Summer event. Lots of humans and dogs came out to participate and try to win prizes. Among the participants was a familiar face: Rockford.

Rockford was in our Pen Pals program in 2018, and was adopted in May 2018. Coincidentally, the adoption event actually happened at Blue Bee Cider! He and his owners were all smiles throughout trivia, despite the heat. We bet he was helpful during the “All About Dogs” category, especially when the question, “How long is the training program for Pixie’s Pen Pals?” came up!

Thanks to Blue Bee Cider for being an awesome community partner!