Finding Memphis by way of Nashville

In May of 2022, FETCH a Cure provided a grant of $5,000 towards surgery for Nashville, a 7-year-old pitbull mix from Aylett, Virginia. Following his splenectomy, Nash began chemotherapy and bravely fought lymphoma for many months, ultimately succumbing to the disease right before Christmas. His family shared the following tribute to Nash and explained how he put them in the right place at the right time to welcome a new member to their family. 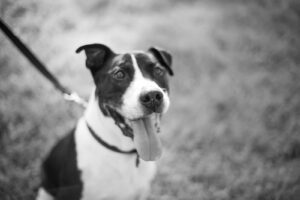 “One afternoon in December 2020, my husband Phillip came home with a sheepish look on his face and a dog by his side. ‘He was standing in the road and I told him to jump in the truck if he wanted a better life,’ Phillip told me. We took him in and after not being able to find any identification or owners, we had a new dog. He had wonky ears and started playing like a puppy from the moment he came into the house. We named him Nashville.
It was clear Nashville had never been in a house. He skated on our hardwood floors, jumped when our fireplace came on, and investigated every little thing with great curiosity. He learned our routine and would guide us to our next step each day. Nashville never needed a leash in the yard because he would always stay right next to us. He mowed the grass with Phillip – followed him up and down each stripe of our 5 acre lot. He would come in with green paws and a big smile. Nashville watched everything we did – if we coughed or sneezed, he would check in on us. If we did something out of the ordinary, he would want to know why. When Phillip worked in the yard or fixed equipment, Nashville would watch him and walk with him everywhere.
It was more than loyalty. It was more than curiosity. Nash was engaged. He paid attention. He absorbed everything. He took in everything and radiated joy. The first time he caught a ball that was tossed to him, he ran up to us to show us how proud he was. When he was able to run with our other dogs and keep up for the first time, he ran up to us to make sure we saw him. Every time we moved, he jumped up from whatever he was doing – ready to join us in where we were going. He was always aware, always paying attention, and always putting us first. He trusted our opinion and he trusted us with his life.
When we found him, it was clear he had been neglected and abused. He wouldn’t look us in the eye for weeks. He would jump at loud noises. And his legs had been broken at some point and never set properly. He had heartworms and Lyme disease. The vet told us on his first visit that if we didn’t treat the heartworms, he would only have a few months because they were so advanced. So, we started on a slow heartworm protocol and started treating the Lyme. After his heartworm protocol, we needed to wait about 6 months before we could get him neutered.

In spring of 2022, we had a vet appointment to check on his heartworms with the intention of then scheduling him to get neutered. A few days leading up to that appointment, he had stopped eating. I started hand feeding him which was the only way to get him to take a few bites. He lost a lot of weight very quickly and we knew something wasn’t right.
We were not expecting the vet to tell us that Nash had cancer – lymphoma which originated in his spleen. We were not expecting to hear his cancer was terminal. We were not expecting to hear that with chemo and surgery, he may have a year – maybe. It felt wrong. It felt unfair. It felt unreal. How could this loving, loyal, and trusting best friend have only a few more months? When did he get a break – a chance for a long, healthy life? Why, why, why?
Phillip and I decided that as long as Nashville tried and fought, we would try and fight. As long as he wasn’t suffering, we would continue to do chemo. We would take our lead from Nash.
We started on chemo right away. Nashville seemed fairly unphased by the treatment. We knew Nash needed surgery and had a long chemo journey ahead of him. We reached out to FETCH a Cure and told them Nash’s story. It was with great relief and joy when we received the CIC email informing us of the grant Nash would be getting! Now, we knew he could get his spleen removed and we could start saving for chemo. He had a chance – a chance at living the rest of his life with as much health and happiness as possible. He was a completely different dog after his spleen was removed. He was the most playful and vivacious right after his splenectomy. It made us realize just how much pain his spleen had been causing him.
Because of FETCH a Cure’s grant, we got 7 more months with Nashville. He grew closer to us during this time. He reached out for comfort and affection on the really bad chemo days. He continued to mow the lawn with Phillip and never left Phillip’s side. The staff at The Oncology Service said Nashville was unusual – he never needed to be muzzled for treatment, he never pulled away, and he was always engaged. He wanted to know what the techs were doing. He watched the doctors. He paid attention.
Over his last months, we took Nashville on several adventures: to the beach, downtown Richmond, out for dinner, out to see Christmas lights, etc. We tried to fit in a lifetime of memories in what little time we had left. He was always up for anything. He really just wanted to be with us and involved in what we were doing. The chemo started taking a toll and in September, we found out his cancer, which had been shrinking, was back…and back with a vengeance. We tried chemo drug after chemo drug. One after another, they stopped working. Nash declined. We could tell his abdomen was in pain. He grew more tired. He wouldn’t jump up right away to follow us.
Cancer had started to take a toll on him.

In mid-December, Nashville stopped eating. He lost the ability to walk up and down stairs. Eventually, he lost the ability to walk altogether. We took him into VRCC on December 15th. They told us his belly was full of blood and we had maybe 24 hours left. His breathing had changed, partially from the cancer and partially because his lymph nodes were so big, they were obstructing his airway.
VRCC was able to get him stable enough to come home the night of the 15th. We wanted him to come home one last time. We wanted Wilma, Stella, and Petey to have time with him. And we wanted his last night to be with us. We were not able to keep him all night and we had to bring him back to VRCC around 3 am. Nashville loved piano music. He would sit and stare while I clunked around on my childhood piano. In the parking lot, before we went in, I played him one of his favorite songs and he just smiled and wagged his tail slowly.
Nashville crossed the rainbow bridge early on Friday morning with a smile on his face and wrapped in our arms. We know his health, his extended life, and his fight was because of FETCH a Cure’s generosity and willingness to join in the fight against cancer with us. Thank you for joining our journey. Thank you for supporting Nashville.

The day Nashville went to VRCC, I was driving my parents to the airport. They were in town to celebrate the holidays with us. A few minutes after leaving home, my dad turned to me and said, “Stacey, there is a dog in a ditch right there.” It was in the mid-30’s and raining. I couldn’t stop but I promised my dad Phillip and I would check on the dog after we visited Nash.
A few hours later, we went back and the dog was still there. Cold. Scared. And unable to move. Phillip picked it up and put it in the truck. Off to VRCC we went. After an exam, we were told this dog was most likely hit by a car. She had two broken (really, I would say shattered) femurs, Lyme disease, heartworms, and ehrlichia. The vet’s assumption was that she had been on her own for a while. We contacted Animal Care and Control for our county since she had no collar or chip. We were told we could either pay for her reconstructive surgery or they would probably have to euthanize an otherwise healthy dog because there was no one to take over her health.
Phillip and I looked at each other and said, “We did not rescue this dog to then euthanize her. We’ll pay for the surgery and see if anyone claims her.”
The vet, who was also treating Nashville in his last 24 hours, called us and told us she appreciated our situation. She decided to contribute a certain amount of her own money to this new dog’s legs’ surgery. What she didn’t know was that we had an account for Nashville’s chemo which we continually gave to since his diagnosis in May. With the vet’s contribution, the amount of the new dog’s surgery was exactly the amount we had left for Nashville. We felt like Nash was telling us, “You took care of me so well, now take care of her.” Funny enough, the new dog, whom we named Memphis in honor of Nashville, has a previously broken ankle which makes one of her front paws stick out a little – which reminded us of Nashville, too.
The cascade effect of FETCH a Cure is clear – they gave Nash life and now we are able to give Memphis a chance at a long, healthy life. Thank you for all you do for pets and their humans. Thank you for checking in over the course of the cancer journey and providing support after losing a pet. Thank you for the constant care you give. It changes families.” 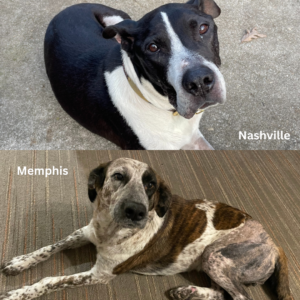