Why I Foster and Why You Should Too 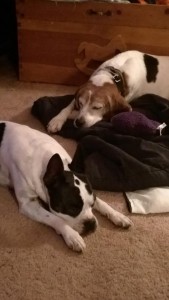 Sooner and Fitz, exhausted from playing.

I remember my first foster pet.  I was working in the kennels of a non-profit, no-kill shelter and my friend in the admissions department had a found a kitten and had been able to surrender him to the shelter.  And she wanted me to foster him.  Oscar was a small little thing, but he was spunky and social and so very sweet.  He let me put him in a little scarf and take photos and carry him around.  I have had a slew of fosters since then and I remember every single one (I hope):  Tiberius, Juna, Wilson, Carol, Fitz, Bootsie, Troy, Trudy, Ava, Waverly, some unnamed bottle baby puppies, some bottle baby kittens who looked like werewolves, Sawyer, Wayward, Pilot, and Vivienne.  I’m a foster failure:  Vivienne and Fitz are now a part of my family.  Carol is also an honorary Hornberger—her foster care was actually a lengthy hospice stay.  She lived with us for over a year before finally succumbing to her health issues.  Although it ended painfully, as all of our relationships with our pets eventually do, I would not have traded my time with her for anything.  All of these fosters need time, patience, healing, understanding, and unconditional love, and, in some cases, bottles every 2 hours, and I was happy to provide it. 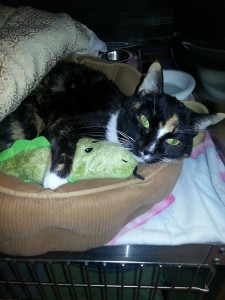 Since I’ve been the Pen Pals Coordinator at FETCH a Cure, I have fostered Copper, Sooner, Ernest, Quen, Annabelle, Flossie, Sawyer (named in honor of the above mentioned Sawyer), and Shortstop.  That’s 8 dogs in 6 months and not counting the time I babysat Buttercup.  I am lucky to have an understanding family and (for the most part) pets.   I love every single one of these dogs and think about them, worry about them, advocate for them, become frustrated when they aren’t adopted after being perfect, loveable guests in my house.  I worry about Ernie’s epilepsy and stranger issues and whether or not someone will finally give him a chance—they would find out that he’s a wonderful, quirky guy who enjoys the feel of a breeze on his face, loves to play with other dogs, and is incredibly loyal once he trusts you.  I worry about Flossie, who is the life of the party and so very sweet, goofy, and happy.  I worry about Quen, a great snuggler, kisser, and toy ripper-aparter; he loved everyone in my house and went right up to them to ask for cuddles.  I worry about Sooner, who is one of the most tolerant and lazy dogs I’ve ever met, who lets me roll him around and runs in such a goofy way, who loves going to the park and meeting horses and kids and geese (and who I would have adopted by now if I hadn’t just adopted Vivienne). 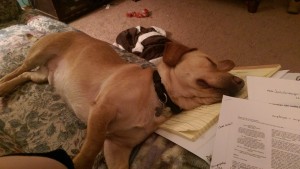 Luckily, Copper, Sawyer, Buttercup, and Shortstop have gone on to live with wonderful families who give them the utmost attention and care.  I have been lucky with all of my foster pets—I’ve met their adopters and have had follow up and knew they really loved all of my babies.  They also really appreciated everything I did for them and the information I could provide about their background, behavior, and likes and dislikes.

For Pen Pals dogs, foster care is especially important.  Even brief weekends in Richmond for adoption events can show us how our dogs will adapt to the “real world.”  Life in correctional facilities is more structured than dogs can expect once adopted, and they are not exposed to new things—life there is routine and becomes mostly predictable.  We also get our best photos from foster care!  Some dogs like Buttercup and Butterbean need long-term fosters so that they can resolve medical or behavior issues.  Sooner is in foster care just because he’s been in the program for over a year and wanted to give another dog a chance to learn everything he’s learned from the inmate handlers in our program.  Flossie came into town for a weekend and her foster mom held on to her just because “she’s so easy to take care of and fits in so well.”  Becoming a foster parent is so fulfilling and rewarding and I can’t ever imagine going too long without a foster pet. 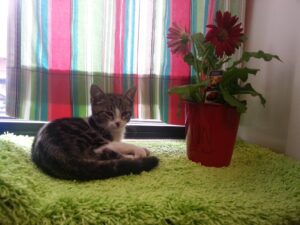