From the Foster: Ellie Mae 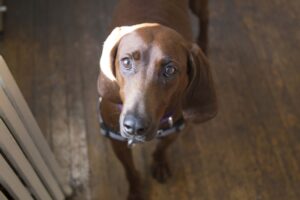 I had the pleasure of fostering Ellie Mae for a fun-filled weekend at the end of September. This gorgeous girl is a five-year-old redbone coonhound and is the perfect adventure buddy. We had a ton of fun getting out and about in Richmond, and I can’t wait for her to find her forever family. Sweet Ellie Mae has a lot of love to give.

She came into the office with two other Pixie’s Pen Pals pups named Cleo and Perry Mason, and the three of them played, played, played until it was time to go to their respective fosters for the weekend. Watching her play with Cleo and Perry Mason made it clear that she would make a great companion for another pup. She’s playful, friendly, and gentle — the three of them became best friends before long. 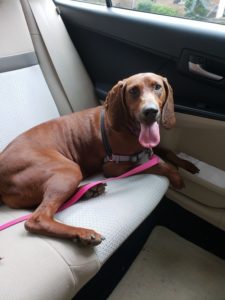 he car ride to my apartment was a breeze. Ellie does so well in the car and enjoys just being able to look out the window and feel the wind in those adorable floppy ears. She’d make a great travel buddy for those who like to hike and go on little adventures.

Once at my apartment, Ellie Mae was fairly curious about my two cats, who were not super thrilled that I brought a dog home. Ellie was still in play mode, so I kept the kitties and her separate for the weekend to minimize stress for all of my four-legged friends. If given a slow introduction, and if there was another doggie playmate in the household, I think Ellie Mae would ignore any cats that are around.

Over the weekend, Ellie had no accidents and didn’t get into anything she shouldn’t have. She was an angle. We went on a bunch of really long walks, and Ellie was great on the leash. The only times she pulled was when we spotted another dog — she wanted to meet every potential new best friend! If called or guided with the leash, she would quickly get back to walking with me and sniffing anything and everything we passed. She likes so take in all of the sights and smells, but will keep moving with you without issue. 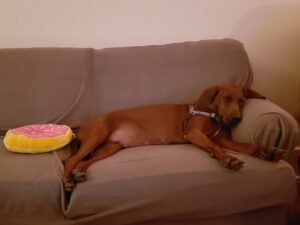 In addition to our many walks during our three days together, Ellie went to the South of the James Farmers Market, on a trail hike on the Southside of the river, to the Richmond Dog Festival, and to Party on the Avenues. Ellie does get excited in environments where there are lots of dogs and people around, but there are few dogs who wouldn’t. It was during these times that Ellie became somewhat vocal — she wanted to say hello to everyone! Her barks, although persistent at times, were very friendly. Her tail was wagging the whole time. When I knelt down to pet her, or someone came by to give her some love, Ellie would quiet down. These super crowded events are a lot for dogs, but Ellie was very well behaved and only wanted to let other pups and people know that she was there. If she saw a treat in your hand, she would immediately sit and patiently give you all of her attention, so I’m confident a little training would help would help with any barking. At home, Ellie was quiet and calm. 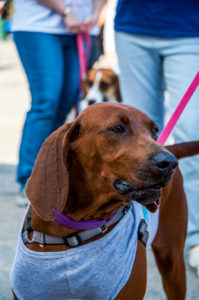 Ellie Mae would do great in a home that is fairly active. She loves to play, and really enjoys getting out of the house, even if it’s just for a leisurely walk around town. After all of our daily adventures, Ellie would snuggle up next to me on the couch and snore. She is so full of trust, love, and snuggles.

To meet your future best friend, Ellie Mae, please reach out to Emily@fetchacure.com or call 804.793.8353. She’s continuing her obedience training at a Virginia correctional facility, but is ready to go to her forever home as soon as possible. After a few short days with her, I’m in love with Ellie Mae. You will be too.