Each November, we launch a bone cancer awareness and fundraising campaign called Holiday Bone Treats. This campaign highlights osteosarcoma, which accounts for approximately 5% of all canine tumors, but is by far the most common bone tumor found in dogs.  It is a malignant tumor of the bone and can develop in any bone, but most often occurs in bones bordering the shoulder, wrist and knee.

The “rein-dog” displays are perched at the reception area of local businesses to encourage conversation and educate the public about the warning signs of pet cancer, specifically osteosarcoma. The rein-dogs are adorned with festive antlers and bells to celebrate the holiday season, but they also have bags of locally-donated dog treats featuring the face of a Companions in Crisis recipient who was treated for osteosarcoma. 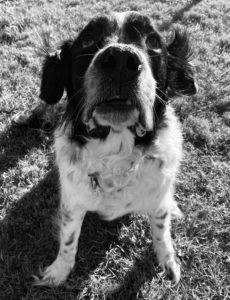 This year’s featured CIC grant recipient is named Madden. Earlier this year Madden’s mom reached out to FETCH after noticing her 11-year-old St. Bernard mix was limping. Madden has been her constant companion since she found him as a puppy in West Virginia. She writes, “When we got into the house, three tri-color fluff balls were active and happy. One small black and white pup was in the corner sulking. He was under fed and had a gash on his face from where his mother was trying to push him out of the litter. The three other pups were accounted for; I knew the little black and white guy would be mine. I took him home and to the vet that day. We have been inseparable ever since.”

After receiving the news that Madden has osteosarcoma, his caregiver reached out to FETCH a Cure and applied for a Companions in Crisis grant, which was awarded shortly thereafter. To stop the osteosarcoma from spreading, Madden’s back leg was amputated. He has since made a full recovery. His mom is happy to report that Madden is back in action, living his life to the fullest with “squirrels to chase and bones to eat.”