How Our Mission Comes Together: Bush Hog (a FETCH Feature)

Meet Bush Hog, an example of how our mission comes together! 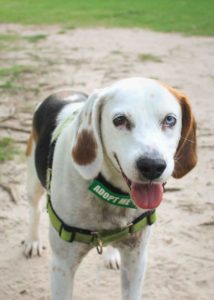 Bush Hog is a seven year old Pen Pals dog whose cancer diagnosis is a perfect example of how our mission comes together at FETCH a Cure. There is not much overlap between our CIC and Pen Pals animals; however, canine cancer is common, and sometimes our Pen Pals dogs are affected. Fortunately, we can support our Pen Pals pups through whatever health issues they present.

Bush Hog AKA Bushy came into our program in December of 2018. We placed him in a foster home in early 2019, but he soon began showing signs of illness. Bushy had repeated urinary tract infections, and we noticed that his mammary glands were engorged, similar to those of a female dog who has had multiple litters of puppies.

After a number of tests, including a ultrasound and biopsy, doctors located the route of the problem: Bushy had a retained testicle, which over time developed a large tumor. These tumors, known as sertoli cell tumors, can release large amounts of estrogen into a dog’s body, which explains why Bushy’s stomach looked the way it did. Thankfully, the doctors at The Oncology Service at Dogwood were able to surgically remove the tumor in late June. Since then, his estrogen levels have decreased (and his mammary glands are returning to a normal size). There are no signs of the tumor cells remaining in his body.

Bush Hog is healthy and ready to go home! 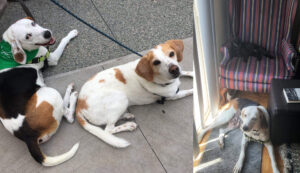 Since the beginning of June, Bush Hog has been in a wonderful foster home. He lives with another dog, Floyd (who was adopted from Pen Pals in 2017) and a cat named Frankie. According to his fosters, Bushy was “excited at first” around them, especially the cat, but he quickly got comfortable and they all co-exist happily. The cat will even go up to him and sniff his ears and face and Bushy doesn’t care!

When we visited his foster home this week, we were so happy to see how great Bushy is doing. He has lost weight, thanks to his fosters for taking him on long walks and monitoring his diet, and he looks so much healthier than he did even a few weeks ago. In typical hound fashion, he didn’t jump up the second he saw us, but that changed when he realized we brought him a present: a couple stuffed toys. “They are his absolute favorite,” says his foster dad, Jacob. “It makes him so happy to tear them apart.” 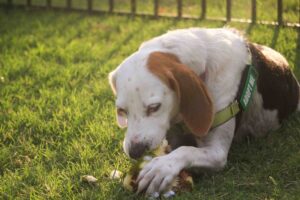 At the local dog park, Bushy grabbed one of the toys and carried it to a corner of the park, where he settled down and got to work chewing it apart. “Bushy can destroy even the most ‘indestructible’ toys,” laughs Jacob. “He likes to find the weak points– the seams– and shred.” It’s important to note, however, that Bushy doesn’t eat it. He simply finds joy in taking it apart.

After successfully dismembering his toy, Bushy sunbathed for a bit, only moving when he heard someone walk by. When Jacob pulled out treats, he was back on his feet, ready to play. Bushy is very treat-motivated, and gets very animated about food. We think he would be very responsive to training with treats. 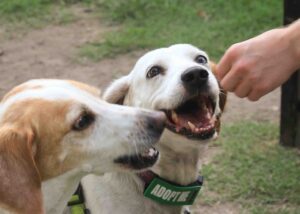 Bushy is a simple man: his biggest interests include belly rubs, chewing toys, and sunbathing outside. He is great with other dogs, but doesn’t love having them in his face or jumping all over him. We think he would do great in a home with a respectful doggie sibling who responds to his body language. Bushy likes cats, and after his initial excitement and interest in them, will get along great with them. A dog-savvy feline would be do well with him.

“Bushy has such a sweet, goofy and gentle personality and would be loved by anyone,” says his foster family. “He is just so happy to be with his people, and that’s all he cares about.”

If you’re interested in giving Bushy a loving home, you can fill out an application here. Please contact spavilack@fetchacure.com with any questions.

Thank you to our friends at Cumberland Animal Hospital and The Oncology Service at Dogwood for treating Bushy.