This is nine-year-old Nala’s third time facing canine cancer. As a pug and two-time cancer survivor, her parents knew to keep an eye out for any new lumps or bumps. Sadly, this summer her dad noticed a bump at the base of her tail and their veterinarian determined that it was cancer. Although this tumor is more aggressive than the others, with chemotherapy, Nala’s veterinarian is hopeful that she can beat cancer once again. Through FETCH a Cure’s Companions in Crisis program, Nala is getting the treatments she needs to continue being a caretaker and beloved companion for her adoring family. Read more about Nala’s sweet soul and caring tendencies below, and let’s wish her all the best as she’s treated at The Oncology Service in Richmond, VA.

In the fall of 2007, my husband was working for the World Health Organization, running health programs in 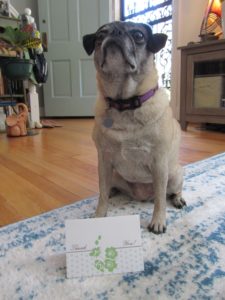 developing parts of Latin America. By winter, he was disabled, diagnosed with a number of rare neurological disorders, crippled with confusing symptoms and unable to work.

By 2014, Mike was in the worst of it. He was in severe pain 24/7 and, understandably, extremely depressed.  His doctors suggested we get a dog, both for company and to help him have a routine during the day.  That was when we found Nala.

Nala was 3 when we adopted her, and she is the brightest, funniest, cutest (factual statement, as pulled from every person who has ever  met her) dog I’ve ever met.  Nala immediately and instinctively understood Mike.  She woke him up at the same time every day – later than most dogs would want to eat and go out, but as early as he could manage. She somehow knew when his pain was particularly bad, changing her MO from climbing wildly all over him (I can’t claim she’s the best trained…) to laying quietly next to him, one paw resting on his chest.  She kept him to an unfailing schedule, which meant he met our neighbors with dogs on similar schedules – probably the first time 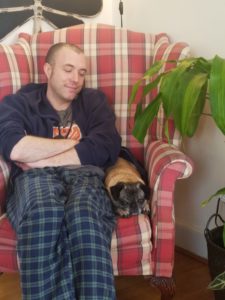 he had been social in years, confined as he was by his pain, generally not well enough to drive, and me at work all day.  For the first time in years, I came home to Mike with stories to tell again  – Nala had a crush on Monkey, the pug across the way, but hated the toy poodles that were always barking in the ground floor balcony across the street.

When Jenny, one of our two rescue bunnies at the time, was diagnosed with a heart tumor, Nala took over her care too, standing guard when Mike gave her her nightly meds and licking Jenny’s head while pointedly ignoring Trouble, Jenny’s beloved but grumpy companion.

Some breeds are predisposed to mast cell tumors, and pugs, we’ve learned, are one of them.  We moved to RVA (or back to, in my case) a year after first adopting Nala, and in the winter of 2017, Nala was diagnosed with her first mast cell tumor.  She needed chemo then as well, and came through it like a champ.  Last summer, she developed two more mast cell tumors, which luckily only 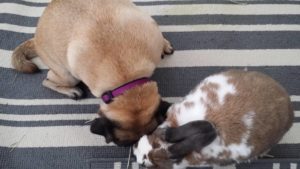 required surgery.  The debt from all of that is substantial (if only I had the social media talent to make Nala one of those pug influencers), but we are committed to doing whatever is needed to keep her happy and here with us.

Since Nala’s initial tumor, Mike has made it a habit to check her regularly, and this summer (because, you know, 2020) he found a minuscule tumor right above her tail.  When her primary vet came out into the parking lot after the biopsy, he just threw his hands in the air and shook his head.  (At three tumors in, he declared the problem was becoming rather annoying. We adore him.) 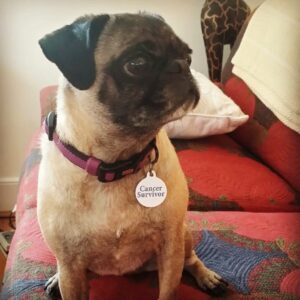 He did surgery that day, and we were at the oncologist just a few days later.  We understand from Nala’s oncologist that this tumor is far more aggressive than the previous ones – without chemo, she would only have a few months left to live.  Nala tolerated this same treatment extremely well the first time around, and so we hope and believe that she will be just as resilient this time.  Pug genetics, our oncologist keeps saying, aren’t supposed to throw tumors this aggressive in the first place, so we hope that maybe this means it didn’t get a chance to metastasize before we caught it.

One last thing that seems part of the story — last summer, to our continual amazement and disbelief, a treatment was finally found for Mike’s symptoms.  While he can’t be cured, the treatment works well enough that he can live (sort of) like a normal person again.  When the pandemic rolled around, and Mike was unable to be treated due to hospital closures, he slipped back into months of his previous pain and disability, and Nala picked right back up like her support pug duties never left off.  We can’t imagine life without her and can’t imagine doing everything we can for a dog who has done so much for us.