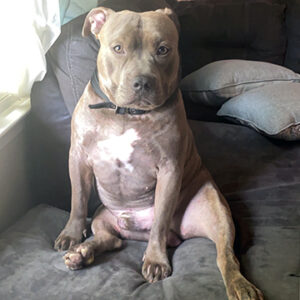 Rosko is a three-year-old pitbull being treated for B-cell lymphoma by Dr. Christina Manley at The Oncology Service Leesburg. Lymphoma is considered to be the most chemotherapy-responsive cancer in dogs, and B-cell lymphoma is more prevalent than T-cell lymphoma. Rosko’s mom is hopeful as she shares his story:

“My sweet three-year-young Rosko has so much life and will to live. I rescued him at four weeks old; he was left for dead but he had a different idea. Since then he has been the center of mine and my two girls’ hearts! This dog knows no stranger and has the biggest sweetest heart.

“In January Rosko developed a lump under his jaw. Upon taking him to the vet, he was treated for an ear infection and released. He became sick again and was diagnosed with pneumonia. After several trips to emergency vets and my local vets we finally had a fine needle aspiration that confirmed he did in fact have large B-cell lymphoma.

“Rosko loves belly rubs and is a stealer of spaghetti noodles. He spies on all the neighbors and is the most popular dog on the block. He has now started the CHOP chemotherapy protocol to treat his cancer.”