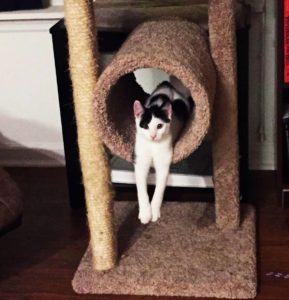 “We adopted Nook as a two-month-old in Georgia, where he was found seemingly abandoned by his mother in a grain silo. He quickly grew into an affectionate boy who loves to play furiously with his toys, eat just about anything, and chase around our older female cat Amelia, who we call his sister. We moved with both of them to the Richmond area in 2019.

“This past winter, Nook began to display some noisy breathing issues that would begin a series of frequent vet visits and procedures. First he had a polyp removed from his throat, which seemed to alleviate his symptoms for a short time. But they returned far worse, which ultimately resulted in a hospital stay, tests and imaging at Blue Pearl. We then began taking him to VRCC for a series of visits and consultations that eventually involved imaging and surgery for what was expected to be another polyp. Only then did we finally find out that what was removed from his nose at VRCC was lymphoma. I’ve long since lost track of exactly how much we spent on these various visits and procedures.

“Unfortunately, this came along at a time when our savings have just been depleted because we just bought our first house–we moved in a month ago in the midst of bringing Nook to these appointments, thinking that they would eventually result in a removed polyp and a healthy young cat.”

FETCH is glad to be able to help these pet parents with a Companions in Crisis grant. Good luck, Nook!