Pen Pals: Handlers and Their Dogs Transform Each Other

Any normal dog handler might have been intimidated by Happy, an excitable, obnoxious and sometimes rude mix of part Pit Bull and part bad attitude. 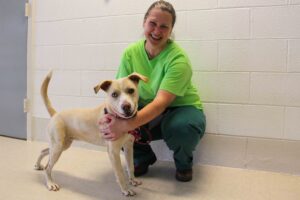 But dog handler Donna Blanton greeted her new assignment with enthusiasm. “I love the difficult dogs, the dogs with attitude because I think those are the true saves,” Ms. Blanton said. Happy is now in a foster home and awaiting adoption. “To be able to save her life, really makes a difference,” Ms. Blanton added.

That quickly, the dog handler captured the essence of the Pen Pals program, a rescue effort run at three Virginia prisons by Fetch-A-Cure. Pen Pals is designed to train dogs from the Richmond area. Each year the Pen Pals Programs at FCCW, Buckingham Correctional Center and Lunenburg Correctional Center train an average of 90 dogs. Some of the dogs have graduated to professional jobs. A few have become therapy dogs, and for a time, one of the canines actually worked at FCCW with her owner, a psychologist, until both moved to a new job.

But the vast majority the 244 dogs that have successfully completed the program since it began at FCCW in 2003 have become pets. They completed the six-week obedience training, living with offenders around the clock in their cells.

Many of the dogs, like Happy, make a seemingly magical transformation into wonderful pets. For the majority of the FCCW inmates who participate in the program, Pen Pals is an extraordinary blessing and a privilege, they said. Many consider it a good opportunity to reconnect with another living being, which helps them eventually to reconnect with their fellow humans. The handlers at FCCW said they learn to communicate with the dogs, especially with non-verbal flowing commands, encouraged by their trainer Kasey Herrera, a master trainer and a behavior specialist who owns 2SpeakDog, a dog training business in Richmond. She volunteers her time by coming to FCCW at least once a week. 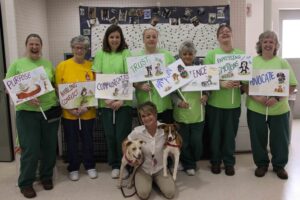 “It’s not just teaching them dog handling,” Ms. Herrera said. Handlers learn responsibility, motivation, basic communication skills and basic working skills. This is not easy for them, but when they succeed there is satisfaction. On this day there was a meet and greet for Briar, a most agreeable Jack Russell. Later, Ms. Herrera will make a home visit and examine fences, notice relationships, such as how the dog might interact with children, and make suggestions about what to do in different situations. Pen Pals checks references and then follows up in what Ms. Herrera calls the canine release program. Before the placement is official, adopters receive a free training session. The handlers readily embrace the notion that they are doing much more than saving the dogs, much more than just training them. They teach about healthy, positive behaviors and ultimately add quality to the dogs’ lives. The women benefit too.

Anecdotal evidence suggests handlers experience a lower recidivism rate and otherwise have a better track record of succeeding after release. The current crop of handlers at FCCW say the credit goes, at least in part, to the lessons they learn from the dogs. “This teaches me patience every single day,” said Ms. Hughes, who gained the most from one of her most difficult dogs. “He had a lot of problems. I learned so much from him.” Ms. Hughes and Ms. Burnette work as a team, asking for help with a particular dog-training issue, and moving quickly to offer help to others as they make progress with their dogs.

“No dog is the same,” Ms. Burnette said. “You learn in the moment, and it can be very frustrating, very frustrating at times, but then it is also very rewarding.” Many say they learn to laugh, to play, to persist and to work very hard. “This gives me a sense of purpose,” said Jennifer Kszepka. “Nothing gives me the drive that this does, realizing that the dog needs me.” Ultimately, this is about getting a second chance, for the dogs and the offenders. Ms. Kszepka remembers one of her most important lessons. “When I came in they told me, ‘You can come into this program and learn how to train a dog, or you can come into this program and be transformed.’”