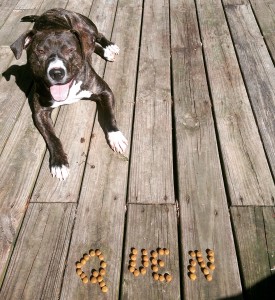 Quen is a sweet, 2.5 year old, 55lb pittie mix who is seeking a foster, foster-to-adopt, or forever home.  Quen loves spending time with people:  he is game for cuddling and watching TV, going running, or even hiking; as long as you’re with him, he’s very happy.  Quen is crate- and house-trained, and Canine Good Citizen trained.  He has worked especially hard on his impulse and excitement control.  Quen loves chewing on his own toys and will leave your things alone.  Quen doesn’t mind being left alone while you’re at work, in the crate or out of it, and can go without a bathroom break during a standard work day.  Quen is very vocal–not with barking, but with a range of rumbling-type noises–they can sound scary to some people, but for the people who know him, he’s usually expressing that he wants to get in your lap, wants you to pet him, or needs help getting a toy he knocked under the couch.  Once Quen bonds with you, he will pretty much let you do anything–put him in sweaters, carry him to the bathtub, trim his nails.  Quen is great at the vet, does well when boarded, and is good in the car.

Quen is doing very well in his current foster home, but another dog in the home has become ill, so Quen needs to find another foster home so the other dog can recover.  Quen is very much a dog who needs time and space, but once he becomes accustomed to a routine or is exposed to things enough, he usually gets used to them and will at least ignore them.

Quen has some special needs.  First, he has environmental allergies that w 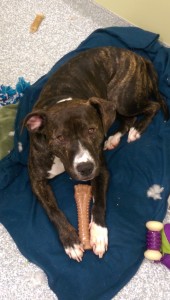 e are working on controlling with immunotherapy.  Every now and then, these allergies flare up due to stress or environmental factors, and he will need additional medication.  This can be a costly medical condition, but while he is in FETCH a Cure’s care (via foster), his medical bills are covered by the organization.

Second, Quen has fear of most strange dogs, and does not do well meeting them–he can eventually get used to some dogs, but only with careful, slow introductions.  His fear instincts are to go on the offensive and to lunge and growl; he’s never done anything more than scratch another dog.  He particularly dislikes high energy dogs.  Quen does best with similarly scared dogs and has made quite a few friends with calm dogs or very submissive dogs in the prisons.  Quen’s fear of dogs is not typically disruptive on walks–he is fine with most dogs at a distance and will continue on his way. 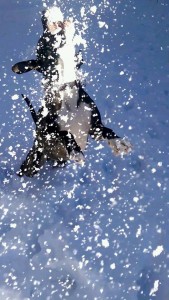 is frightened of some people who are intimidating or people who are scared and hesitant around dogs.  Quen has never harmed a person, but can seem scary when he’s scared.  He also feels the need to protect some of his friends from strangers.  With appropriate introductions to people who may be less experienced, he does very well–whoever takes Quen home will be trained on how to introduce him to people and help Quen make the right decisions.

Quen comes with a ton of support:  one-on-one and group training with a professional trainer, free petsitting for life from his current foster mom, and a Pen Pals Coordinator who is available via phone 24/7.  If you have a home available for Quen, even just as a foster parent, we would all be over the moon.  Quen needs a home with no other pets and with kids teen and up.  He has done well in the city, the suburbs, and rural areas.  Quen would love a home with an experienced, confident handler who is willing to continue his training.