We met Alison, a/k/a Raleigh’s Mama, at FETCH a Cure’s recent Mutt Strut. We thank her for sharing this wonderful story of her dog’s life. Raleigh is a fine example of the value of cancer treatment! We are sharing a series of treatment success stories this week. 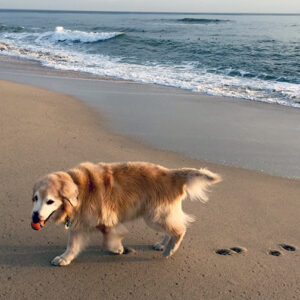 “Raleigh, my sweet and loving golden retriever, was 11 years old when he was diagnosed with squamous cell carcinoma inside his nose. We had only been living in San Francisco for two years the day I saw blood streaming down Raleigh’s nose, while he was playing with other dogs at the dog park. I remember thinking that it wasn’t a good sign and getting worried. I instantly began to Google search what it could be; seeing results that were scary, I called the vet immediately and got an appointment within a few days.

“My vet wanted me to first try a nose spray, thinking it might be allergies because Raleigh seemed in good spirits — we tried the spray for about four days until my intuition tugged at me to go back and get a biopsy. I remember getting the call — it was a day I will never forget. The world seemed to stop when the vet told me his diagnosis and said he probably had less than six months to live without surgery. And while money was tight then in 2015, I decided we were going to go to the best place nearby that could see him: UC Davis vet oncology.

“My mom flew out from Virginia to California to help me with Raleigh during this time, providing amazing emotional support. The day we drove 1.5 hours to UC Davis vet oncology was a beautiful, warm and sunny day. The staff was very kind and Raleigh was his happy and loving self, wanting to greet everyone. The oncologist told us that we’d do a CT scan first to understand the size of the tumor and where in the nose it was located, to see if Raleigh was a candidate for surgery. We prayed for positive news and were blessed with learning they could remove the tumor via surgery and likely get all the margins, as well as give the reconstruction a nice appearance. We were thrilled by this news and the possibility of having more time together.

“Because UC Davis vet oncology is one of the best, there was a waiting list for surgery. We called frequently to see about getting the soonest appointment, and were lucky to get in within three weeks. The weekend before his surgery, I took Raleigh to some of his favorite places — the beach, many different parks, and long walks, and gathered him around friends and family.  The morning of surgery came and we drove out to Davis on a very hot day of 103 degrees. After admitting Raleigh in the morning, when he received so much love from the staff, we waited patiently until early evening to learn how surgery went. Good news — they were able to get 100% of the tumor margins and Raleigh was doing well, sedated and sleeping. I was so grateful to UC Davis vet oncology and so thankful all was going to be OK.

“Raleigh spent two nights at UC Davis vet hospital and when we were able to pick him up, it was hard to see his wound. I was worried about how it would heal and how it would affect him — his breathing and all of our usual activities like going to the beach. They told me it would take about a month to heal. There was the wearing of the cone for several weeks, but Raleigh was a good sport, and throughout his healing he was the same sweet and loving golden. His resilience through the surgery and healing process inspired me so much — he was such a trouper and always happy. He got lots of attention — many people would stop and ask, ‘What kind of dog is he?’, or ‘What happened to his nose?’ And stare. It was a constant stream of comments early on, but I was always strong for the both of us and told him daily how unique, special, handsome and accepted he was — to me, he was even cuter with this new face.

“Because of the amazing care we received at UC Davis vet oncology and the love of everyone — friends, family, neighbors and strangers — Raleigh would go on to enjoy the activities he loved for another three fabulous years. Every day, I felt blessed and grateful to have this much time together, as we were told we might only have an additional 1.5 years. Raleigh passed away peacefully at home at the age of 14, a few days after doing a two-mile walk and barbecue with neighbors. I miss his joyful spirit and companionship daily.

“After relocating temporarily back to Virginia, I came across FETCH and their mission and wanted to get involved and also share Raleigh’s story. Raleigh meant the world to me and I hope this story can provide some hope for those owners that are going through cancer surgery and treatments. Please reach out if you have any questions on squamous cell carcinoma in dogs and I will be happy to try and answer.”