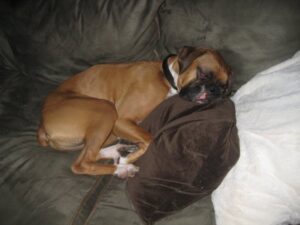 I adopted Gibbs from the Arlington, VA Animal Shelter when he was almost 1 years old in February of 2007.  The last 5 years of owning Gibbs has truly been a joy and a blessing!

Though we have had our share of adversity.  Less than 6 months after adopting Gibbs, he started having seizures and I realized he was epileptic.  After trying different natural remedies and monitoring the mild seizures, Gibbs had a grand mal seizure in summer of 2008 and went into status.  He basically had to be put into a drug induced coma to get the seizures to stop.

Thankfully that worked and Gibbs has been on Bromide ever since to treat his seizures.  He’s had an array of other medical issues from ears, stomach, urinary, etc., but we’ve gotten them all treated and gotten him healthy!  That’s why I was so devastated by the news that he had stage 2 cancer.  I’ve worked so hard to get him healthy and I want to keep him that way so he can live a full life!

Gibbs has truly been an amazing pet.  Since I adopted Gibbs I’ve had several stresses in my life, to include the death of 3 of my grandparents and my aunt, job & financial stress, and business stress of selling one business and starting another.  All the while, Gibbs has been a constant that has made me smile through stressful or emotional times!  And that is why I will do anything to keep him healthy!