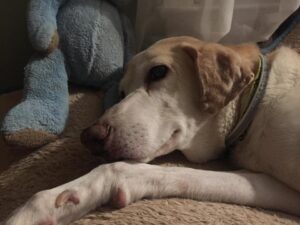 In the late summer of 2005 after purchasing our first home, my husband and I started to think about adopting a dog. Having seen the show Cell Dogs on Animal Planet the year before, I researched the rescue group and found Pen Pals. After working with them to see if we were a match for a pup in their program, we headed to a center in VA to pick up our pup (known at the time as Blondie). We met with the inmate handlers and found that she was an awesome dog and joined our family. Though her nose always drove her brain, her heart couldn’t have been more sweet (she even had a tuff of hair in the top of her head in the shape of a heart – and no, I’m not kidding). She was a wonderful dog and so caring as we added two more members to our family over the years (my daughter then my son). But in October, just before my daughters birthday one of lumps that had started to show up on her began to grow very large and quick. By November she had the biggest one removed (about the size of a cantaloupe) and seemed to be bouncing back a little. But just after Christmas her walking abilities started to slow as did her appetite and she began to loose weight. Within the past two weeks, her hind legs could barely support her and left her pretty well settled on her bed 24/7. Yesterday, January 22, 2015, with sad hearts we did the best we could for her and allowed her to sleep. We miss her terribly, but know that she isn’t hurting anymore and enjoying chasing the squirrels and deer in heaven while eating all the pizza and cookies she can find on counters and in the trash bins. 🙂
Pen Pals is an amazing rescue that allows families to give back in so many ways. A co-worker and friend just adopted their dog from the group a few months ago after I told them about it and they couldn’t be happier with their new pup either. Hopefully after our hearts heal, we’ll look to find another pup to show lovin to from Pen Pals.