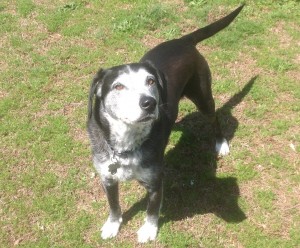 As of March 15, my dog Clancy is about to start Round 2 of chemotherapy under the supervision of Dr. Lynn Harpold at the Veterinary Referral and Critical Care hospital (VRCC) in Manakin-Sabot. In early February, he was diagnosed with mediastinal lymphoma, a relatively rare variety. Survival time is only weeks without treatment, so I decided to proceed. But boy, it is a difficult decision. Is this what he wants? Or what I want?

It is interesting that Clancy started seeming different to me as early as October. His appetite changed; I had to coax him to eat. Then he had some horrible, scary symptoms. One day, he stumbled jumping back onto the deck. He wobbled, trembled, and listed to one side. He had an MRI and then an ultrasound; they found nothing. But VRCC had noted high blood pressure and put him on BP meds. Immediately, he improved and was pretty much back to normal. Was any of this related to his cancer? I guess not. But maybe it was a kind of blessing, because it prompted me to watch him more closely.

So, when he started coughing and gagging a bit at the end of January, I took note and after a couple of days, emailed Dr. Harpold. She said not to wait for her; take him out to VRCC. Days matter with lymphoma. The emergency medicine vet took radiographs, noted fluid in Clancy’s lungs, drew some out and sent it off to pathology. She told me, though, that it looked like lymphoma to her, which was confirmed via pathology a few days later. We started chemo right away.

Clancy’s protocol has included prednisone, the drug of choice for those who do not proceed with chemo. His 5-week cycle includes vincristine, cytoxan, vincristine again, doxorubicin and then an off week. That cycle repeats for a total of five times (25 weeks). We are about to start the 2nd of the five cycles.

Clancy went into remission almost immediately and is doing fine. I can tell he feels good – he’s alert and even frisky. He’s had zero ill effects from the first round of chemo – no vomiting, no diarrhea, etc. He takes his prednisone, Pepcid AC and BP med in cheese and has a good appetite. I’m very pleased and encouraged with how well he is doing. He’d probably have passed away by now if I’d done nothing. But this is not easy. Although I can (kind of) afford it, the chemo is very expensive and I have to endure the judgment of people who silently questiin spending thousands of dollars on chemotherapy for a dog. The weekly trips out to VRCC out a cramp in my schedule and were difficult during February’s bad weather. And then there’s Clancy’s personality. He’s a loving and affectionate dog with me, but turns into Cujo at the vet. He is aggressive and a bite risk. They keep a plastic cone on his head at all times, to reduce the risk. This aspect of things is very stressful on me.

But this afternoon, I’ll put a tarp on the grass (ground is wet) and then a comforter, and Clancy and I will cuddle and doze happily in the Sunday afternoon sunshine. Right now, his quality of life is normal, and I am grateful for every day we’re having together. Should Clancy fall out of remission, or should he start reacting poorly to the chemotherapy, I’ll change course. But for now, life is good.