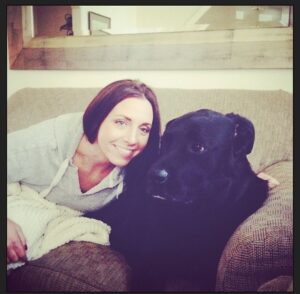 In 2009 I was living in North Carolina where I got my little man for free off Craigslist. I named him Kudjoe, but changed the spelling so people wouldn’t mistake him an evil dog from a Steven King novel 🙂

Kudjoe grew very quickly and by six months when his legs were bigger than the rest of him, and weighing in over 60 pounds, I knew my little angel was a little more than just a lab. Kudjoe single handedly chewed through my DVD collection, ripped up and ruined my carpet, and even ate through dry wall in my living room. I was later informed by my vets that he was part Chow and Great Dane, and quickly quickly he became less of a dog and more of a small pony, weighing a whopping 125 lbs. But Kudjoe never quite realized how big he was, always sitting in my lap, or laying on me with all of his weight. He also never stopped running around, getting the “zooms” as I called it, and because of his size he would knock over everything in his path.

Despite being a big guy, Kudjoe is just a lover. While some shy away from him because he is so large, the most harm he would do to someone is jump up on their shoulders just to lick their face. I live for the moments I walk in the front door and he is jumping up on me to greet me after a long day of work. I love the way he always knows when I’m sad or not feeling well, because in those moments I look up and there he is, always by my side. Kudjoe has captured the heart of my family since I moved home to Virginia, and while my mom once didn’t care for him, he now visit her and lays on her bed as she loves on him and gives him treats. Even my dad, who claims to “not be a dog person”, can be found sitting on one end of the couch with Kudjoe on the other end, enjoying some much needed “man time.” We all have developed many nicknames for Kudjoe that include “Gorilla Nose,” “Kudjman,” “Kudjoe Bear,” “Bear face,” “Bubba Bear,” and lastly “Le Kudj,” which of course is Kudjoe in French 🙂 We have always had a dog since I was born…but none have ever quite been what Kudjoe has been to us all. There is no one’s heart that Kudjoe won’t touch.

Just around Christmas time my family and I noticed that Kudjoe’s appetite wasn’t quite what it normally is (which is more or less Kudjoe eating everything in sight”. He was also drinking an excessive amount of water and not wanting to play much. After a week or so we decided to take him to the vet just to be sure everything was alright…and it wasn’t. He was quickly diagnosed with Lymphoma, and the cancer had settled in his spleen. Within weeks he was having his spleen removed, and then developed an infection a week thereafter. It was confirmed that he has T-cell Lymphoma, a little more difficult to treat than other forms of the cancer. He underwent his first chemo appointment just yesterday, January 29, 2014. In less than a month I have watched my only 4-year old angel lose his energy, his appetite, his playfulness, and that big grin I was always greeted with. I would do anything for Kudjoe just as he would do anything for me and my family. Every night before I go to bed I say goodnight to Kudjoe and whisper in his ear “Mommy loves you…guess how much?” And every night he looks at me as if to say “how much, Mom?” And I whisper back to him, “to the moon and back.” I just want to be able to whisper in his ear at night for as long as I can, and give him his best chance to get back to all that he loves in life.

Update: The estimate for Kudjoe’s treatment was very expensive. Fortunately, FETCH a Cure was able to assist Jennifer and Kudjoe with the total treatment cost.  Jennifer wrote to tell us that Kudjoe is doing fabulous and that he is currently in remission.  This is what she wrote, “Kudjoe and I are doing WONDERFULLY!  Kudjoe is a chemo champion!  All of his lab results show that he is healthy as can be! He has three more chemo treatments and then will just be in for monthly check-ups.  He is 100% back to his normal self and we both couldn’t be happier!  I am so thankful to FETCH a Cure for giving me this time with my angel, I am hoping and praying for much more time to come as he is in remission!