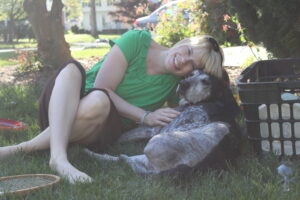 Montana Blue…a big smile crosses my face just typing his name. Our Montana was named after the beautiful western state with big skies nad wide open spaces, which befits his love for running freely, nose to the ground and ears flapping! Montana was our first child – we are now parents of three human children and one other canine. He is twelve now, but as our veterinarian put it, he is a very “lively” twelve.

There is much to say about Montana. I could describe favorite memories like the time he “treed” a black bear when we lived near the mountains. I could write about his intelligence and how his astute expressions and behaviors communicate volumes. I’m thinking now of the time when he was four years old and, being dissatisfied with life since the new addition of our first baby, left us a bold message to communicate his unhappiness: a large mound of feces on top of our bed! I could tell story after story of the hundreds of times he barreled his way through the front door to go for a joy run, always to return home faithfully. Yes, Montana has always had lots of spirit! Perhaps, however, his spirit can be conveyed best by his most recent life event – the amputation of his left hind leg.

About six weeks ago, Montana went into the Veterinary Emergency and Surgical Center to have a consultation for knee surgery. What we thought was a ruptured ACL was found to be a bone tumor. X-rays showed the tumor had essentially taken over his leg and amputation of the limb was recommended. The surgery was performed less than a week later. Staff reported that within hours after surgery, Montana was already where most dogs are in the recovery process after a whole week! He came back home the following day and had to be stopped from bolting down the driveway to chase an animal! He barely skipped a beat!

Unfortunately, test results confirmed that the tumor was osteosarcoma, and thus began our cancer-fighting journey. Montana has had one chemotherapy treatment already It is recommended that he receive five intravenous treatments, which may be followed by an oral medication protocol. Finances are very tight for us right now, so we are doing what we can for him and hoping to prolong a normal, happy and healthy life for him as long as we can.