Timmy the Cat’s Story of Survival

Michelle Raiszadeh has been involved in animal rescue since 2004, focusing on trap-neuter-return, rehab and fostering of homeless cats and kittens. She also is heavily involved in wildlife rescue and rehab. But Michelle’s involvement in animal care doesn’t stop there. She was recently accepted into an accelerated veterinary program at the Royal Veterinary College (RVC) in London.

Naturally, her time in the world of animal rescue brought her close to a few sweet felines, one of them being Timothy. They’ve been inseparable ever since.

Through Thick and Thin

Michelle adopted Timothy, or Timmy, in 2006 from a rescue organization that she had fostered and worked with. He was the runt of the litter and had a herpes viral infection along with his litter mates. His mom and the rest of her babies were found living in and out of a sewer in Northern Virginia until someone discovered and started fostering them. After meeting him, Michelle decided to give Timmy his forever home. 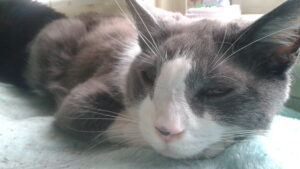 Since then, Timmy has been a constant in Michelle’s life. He helped her survive her years in a Ph.D. program, the loss of her family home and wildlife refuge and her father’s serious illness.

“So, he is certainly one of my best friends and is always understanding of how many foster kitties have to come in and out of our home,” Michelle says.

She goes on to say that, “Timmy is pure love and always greets me when I come home. He must always sleep right beside me, oftentimes attached to my head in some way. I can’t imagine life without him.”

His brother Oliver, another cat that Michelle rescued, feels the same way and misses Timmy when he has to visit the vet.

After finding out that she was accepted to RVC in London, Michelle knew it was the best next step for her to continue to positively impact the lives of animals and follow her passion.

However, shortly after being accepted into the program, life threw a few curveballs. A foster kitty named Ginger that Michelle was caring for recently passed over the Rainbow Bridge, and her beloved fur kid Timmy was diagnosed with cancer.

It started with sinus infections, which was nothing too out of the norm for him. However, all of the antibiotics and antiviral drugs that vets prescribed didn’t seem to completely clear his symptoms. After several weeks with no improvement, a mass began to form on the bridge of his nose. Through extensive testing, another vet feared that it was a nasal tumor. Even more testing, including x-rays, a nasal flush and biopsy, confirmed the vet’s suspicions. At 11 years old, Timmy was diagnosed with nasal adenocarcinoma.

News of Timmy’s nasal tumor was surprising, but Michelle knew she had to do everything she could to save him. A local oncologist shared what options there were based on the diagnosis. Traditional radiation could cause blindness and cataracts or damage surrounding healthy tissue. Surgery wasn’t an option due to the tumor’s location and the type of cancer. Also, this particular type of cancer had a tendency to return soon after surgery. 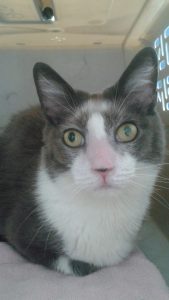 Radiation was the only treatment option, it seemed. The oncologist mentioned a safer form of radiation called IMRT, which could target the tumor more accurately and minimize the amount that effected the surrounding tissue. Of course, this targeted radiation treatment didn’t come without large costs, but to Michelle, Timmy was worth it. She figured that she could somehow raise funds and still afford to follow her dreams to move and go to vet school in the UK.

FETCH a Cure is thrilled to say that we were able to fund a portion of Timmy’s cancer treatment costs through our Companions in Crisis program. After a series of radiation treatments he is now cancer free! Timmy, Oliver and Michelle are safely in the UK where they will hopefully have many more happy years together.

Our goal is to support more wonderful pets like Timmy and pet owners like Michelle. We are forever thankful for the opportunity to give the gift of quality time companions like them. For more information on how you can help our Companions in Crisis program, please join us at one of our upcoming events or consider donating to help us save more lives like Timmy’s.