When families apply to our Companions in Crisis program, we ask them the submit a story about their pet and his or her diagnosis. For the Citron family, Brutus insisted on sharing his story in his own words. We are thrilled that we were able to provide funding for a portion of Brutus’ cancer treatments. Although his journey isn’t over, his mom says he’s doing great. We are so thankful that our financial gift had a part in helping Brutus’ family make the decision to treat their four-legged family member, instead of saying goodbye too soon.

On behalf of Brutus and the many stories like his, we will continue to work hard to carry out our mission of providing greater access to treatment for pet cancer. A dollar amount should never stand in the way between you and additional healthy, quality years with your pet. Please consider making a generous, tax-deductible year-end donation to FETCH so that we can save another best friend like Brutus. 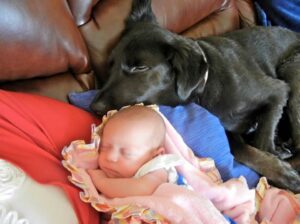 Ever since I was picked up from the shelter in Ohio when I was three months old, I could never get enough of people, petting, peanut butter and picking up errant crumbs that those people would drop on the floor.  But, it’s harder to lick my people’s faces and hands.  It’s a harder to get petted by my people and it’s way harder to get those crumbs off the floor. I can’t leap up on the sofa and cuddle, because I have had this crazy plastic cone on my neck for way too long. And, it’s way harder to eat peanut butter because I’m sick from something called a Mast Cell Tumor.

Who would think that the last visit to that  humiliating grooming place in August,  where I would put up with being anchored in a tub of water, soaped and washed and dried….would end up with me in the hospital in October,  having a bump removed from my leg….the same leg, attached to the same paw I always counted on to use when I would meet  and greet the people I was telling you about. The same leg I counted on for long walks? 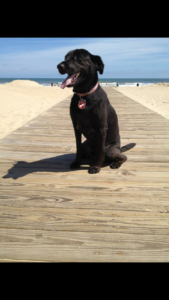 The groomer had nicked a bump on my leg and the next thing I knew. I was in the hospital getting the bump removed. Wow, I loved licking that bump.  Couldn’t get enough of that either! That’s when that cone was on and it has remained a wall between me and my people. Not to mention the crumbs and the bump. But I am 100 per cent trusting of my people.  If they took me to the hospital, if they put that cone on me…I’m good with it.  After all, it’s my people we’re talking about here!

But I can hear. I understand people talk. Don’t I get a toy from the toy basket when asked?  Don’t I know when to sit, know when I’m going for a walk, know when I need to go potty? And, by the way, that cone is making it impossible to play tug with the toy.  Just between you and me…don’t tell my people……I understand EVERYTHING I hear!

I know the word, ONCOLOGIST.  Since the bump had spread that’s where I ended up after extensive, expensive tests. (Not to mention expensive surgery on that bump) I’ve got one cancerous lymph node that I must get rid of. The borders of the bump still have cancer.  My people and my doctors (who I love to lick also) have decided I have two choices, Go to Doggie Heaven in a few months OR have chemo and radiation and stay in the house, healthy and happy, with my people and my floor crumbs for more years.  Apparently, I am the poster dog for having just the right amount of cancer, contained just enough, to get the results every oncologist hopes for and works for.  I’M IN!! 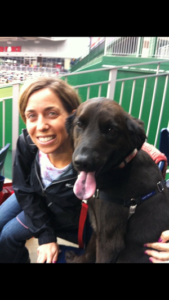 Besides CANCER, MONEY (actually the lack of it) is the evil monster lurking in my future and standing between years of living and loving or months until my death.  I’m sure everybody has a sad story of a loving dog and lack of money. But my people have a story worth listening to and worthy of help.

My mom and dad, Syndy and Jordan, are part of a very exclusive club of people who made a conscious, humanity-loving choice of professions to fulfill the mission that every living person is supposed to accomplish. HEAL AND REPAIR THE WORLD!   Jordan is a teacher in a middle school that serves a large piece of the county’s underprivileged students. Syndy is a social worker with Fairfax County. She helps identify those, birth to three years old, who need early intervention for all kinds of developmental concerns. I’M PROUD OF THEM!

But I’m mad at them. Why don’t they make enough money to keep me alive? Why do two people doing the right thing have to make me suffer an early death? But I don’t just love MY people. I love ALL people. I am trusting that someone of the people who live outside my home will help me pay for what I desperately want and need. I’m counting on it. After all, Taylor, my six-year-old person and BFF in my house, will crumble and be devastated by my early and unnecessary death, just because her parents had to make the gut-wrenching decision to let the evil twins CANCER and MONEY, stand between me and her!

But, I’m lucky. I’ve sniffed a few four leaf clovers in my day. I’m hopeful for an answer. I CAN LIVE WITH!!