“We rescued Bo in 2012 from the Virginia Beach SPCA when he was almost a year old. He had been left at the shelter by friends of his previous owner. We immediately went to meet him, and it was a match made in heaven! He licked our faces as well as his adopted big ‘sister,’ Daisy. They were close until she passed in 2018. He now has a little boxer sister named Rosie he loves. He enjoys playing tug-of-war with her, running at the dog park, and going for walks in the neighborhood. She is certainly keeping him in shape! One of his favorite indoor activities is getting treats out of the numerous Kong toys laying around the house. He uses his ‘Chewbacca voice’ if you aren’t giving him enough attention! 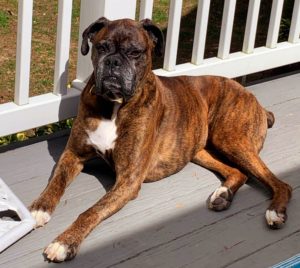 “Bo is a big love bug and loves to lie on our laps and gaze into our eyes. He is the sweetest boy and makes friends wherever he goes. Everyone always says how happy he  is and how enjoyable he is to have around. He is one tough cookie and is already back to playing like a five-year-old boxer again!”

We are glad to hear it and happy to have helped!