Here at FETCH, we love hearing about the lives and the stories of families we are fortunate enough to help through hard times. Chloe and her mom Colleen told us about their lives and their journey through cancer: 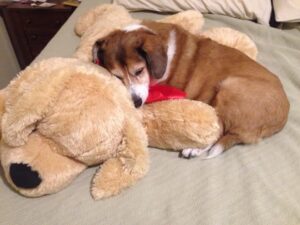 Chloe and her litter sister Maggie were spotted at Chesterfield Animal Shelter on June 2, 2001, the day they were found wandering loose with no identification.  Rob and I fell in love and played with them until the shelter closed but not before making it known that we wanted them.  In fact while playing with them, I jokingly asked, “We don’t need two so which one?”  That got a resounding BOTH!

Fearful that someone would get to them on Tuesday before I did, I bolted from work and raced to Chesterfield to wait for the shelter to open.  I must admit that I may have rudely pushed my way in and announced loudly that I was there for my two pups before anyone else had a chance at them.

These two were joined by a brother in 2007.  Kasey was a perfect gentleman letting these two set the boundaries.  Three and a half years later, Kasey was not himself.  Almost a year of going from specialist to specialist, he was diagnosed with a pituitary tumor.  All three were covered by pet insurance and Kasey had exhausted his annual limit as well as a considerable amount out of pocket.  It was recommended that I consult with a radiation oncologist for a possible treatment plan.  My thoughts were that I didn’t want him to suffer side effects but I would listen with an open mind.  That oncologist introduced me to Fetch A Cure!  After convincing me that radiation would give Kasey at least a year symptom free, she contacted Fetch and our relationship began then.  Fetch paid for the radiation and Kasey had an amazing 3 years before his symptoms and age caught up with him.

“Fetch has helped keep our babies with us for as long as possible.”

Maggie and Chloe charmed everyone who saw them.  Maggie was more independent with an attitude that she was the boss.  On the other hand, Chloe announced right off the bat: “I’m the cute one.”  They’ve logged more travel miles than most people. Chloe seemed to be susceptible to anything that passed by.  She was so familiar with our veterinary clinic that she thought they were family.  We often joked about getting our own personal parking space.  Maggie rarely saw a vet other than her annual visit until December 9, 2015.  She was not her usual happy self and had symptoms of pneumonia.  She was treated at Dogwood, sent home with a bag full of medication to treat multiple symptoms.  When it became obvious that she was getting worse, she was admitted to Dogwood where she was treated by ER doctors, Internal Medicine, Neurology and Cardiology.  Maggie appeared to improve a tiny bit each day with medication and oxygen until December 17 when I got a call stating that she was going into respiratory failure.  Late that afternoon, the heart-wrenching decision was made to love her enough to stop her suffering.

“They are not ‘just dogs’ – they are our heart and soul.”

Several years earlier, Chloe developed a tumor on her liver.  Surgery removed it along with a good portion of her liver and amazingly it was benign.  Dr. Waite felt it best to follow up with her in oncology as precaution.  Sad and shocked at losing Maggie so suddenly, I decided to take Chloe for her checkup five days later since I needed some “good news”.  This time wasn’t so good.  Dr. Waite discovered a tumor in her bladder and tests proved it was Transitional Cell Carcinoma.  The plan was to have surgery to remove it, but it was in a position that complete removal was impossible.  Next plan was for a full course of radiation therapy to reduce or destroy the tumor.  The CT scan required for the radiation treatment plan showed that there were several ‘nodes’ and the cancer had metastasized – only palliative radiation was possible.  Maggie’s hospitalization had exhausted her insurance limit as well as several thousand dollars out of pocket.  Fetch again came to the rescue and paid for the radiation with the help of friends on a fund-raising page.  Chloe and I spent a week in Leesburg for therapy and returned to Richmond where Dr. Waite said she hoped to be able to keep Chloe with us for 6 more months.  That was February 2016 – 15 months ago.  Her response to radiation followed by various types of chemotherapy made it feasible for a second round of palliative radiation. This time, Fetch had just fulfilled their promise to bring radiation therapy to Richmond.  Chloe was one of the first to receive the benefit of state of the art equipment and the expertise of the staff at the Advanced Radiation Treatment Center.   Each day with Kasey, Maggie, and Chloe has been a gift that cannot be measured.  They are not ‘just dogs’ – they are our heart and soul. 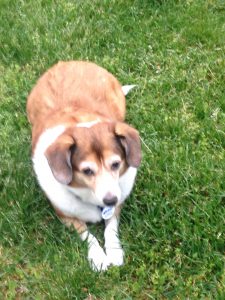 As Chloe’s condition slowly deteriorates and we know the end will come, our focus is to love her, spoil her, comfort her and keep her happy.  I’m fortunate enough to telework so I am with her every minute of every day.  She has good days and bad days but she always knows that she’s safe and we’ll do whatever it takes to make her better.

I cannot thank Fetch A Cure for what they have brought to this community along with awareness of cancer in pets and treatment options.  The financial assistance from Fetch has helped us and other families afford the enormous cost of keeping our babies with us for as long as possible.  For those who are unaware of the cost of treatment, it can amount to as much as you might expect for a down payment on a house.  Insurance, personal monies and Fetch contributions made it possible for Chloe to be here today.

Pet cancer awareness is an important part of our mission. Please visit our resource library for advice on cancer prevention and detection, and other pet health tips.