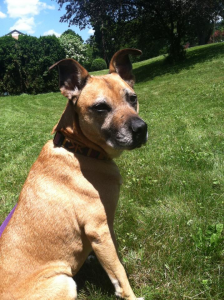 Eva was rescued from roaming the grounds near the VA Hospital, after numerous attempts and coaxing, over a decade ago.  Her dad and rescuer, appropriately named her Eva: Evasive (dog from the) VA.  She wasn’t too fond of animals outside of her home territory, but protected those close to her…speaking up loudly if she thought you were messing with one of her feline friends.  She was a loving companion at home and a frequent destroyer of leftover dinner plates (whether you were done or not), new loaves of bread, containers of grape tomatoes, and anything else she could manage to counter surf or steal out of your bag.  No matter her antics, Eva was a love, and was cared for and cherished by many special people in her life.
Eva was diagnosed with mast cell disease in early January, her initial tumor growth first vaguely noted in November-December 2015.  After a very sudden change, she had 1 surgery to remove a 10 cm x 6 cm tumor from her hind leg in January.  We were relieved to be told it was a low-grade tumor with clean margins and she had a good prognosis–much better than expected.  We had also been well-informed by her oncologist of how unpredictable mast cell tumors are and that prognosis could change any day.  Her longtime pal, Heywood the cat, left her side in March of 2015 also from an aggressive cancer, so we were all too familiar with this battle.  At 13+ years, we opted only to keep her on steroids and Pepcid daily, rather than start chemotherapy.
Recovering wonderfully from her surgery and back to eating Frosty Paws, howling at sirens, and making Three Stooges sounds in her sleep, our happy and mischievous Eva grew a second tumor in March, very near the location of her initial one. This tumor was also very aggressive and grew from 1 cm to 10 cm in about 1 1/2 months.  Other than the obvious, she seemed to be doing extremely well and with the green light from her oncologist, we planned to have a second surgery.   She had a surgical consult 1 week later and in that short time, the tumor was spreading to numerous areas on the inside of her leg, abdominal bruising had begun, and her inguinal lymph node was now very swollen.  To our dismay, her doctors told us she was not eligible for surgery at that point.
We brought her home heartbroken, kept her as comfortable as possible, loved and spoiled her every day, and when the tumor began to worsen, her mobility became compromised, and her behavior and appetite degraded, we sadly opted to end her suffering.  We know that many others are going through the same struggle and many need the help that you provide. Your work is near and dear to our hearts and we hope that some other wonderful being can benefit from your assistance, in Eva’s memory.