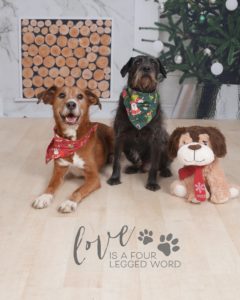 “I adopted Foxy from a high-kill shelter in rural Illinois where she had come in as a stray in 2011. Originally intended as a foster, Foxy quickly became a foster “failure” when I saw how closely she bonded with Wrigley, the terrier mix I’d rescued the year before. Since then, she’s been a tremendous help with Wrigley, who suffered from separation anxiety prior to Foxy joining our family. Thanks to her, Wrigley is now much more calm and secure.

“Foxy has been constantly by my side through thick and thin, including during my own lymphoma diagnosis and treatment in 2017. At the age of 29, I was diagnosed with stage IV Non-Hodgkins Lymphoma – something terrifying to hear. Thankfully, I’m one of the incredibly lucky ones that entered complete remission following an intense treatment regimen. I’m extremely fortunate to have just celebrated my three-year remission in October. I know a lot of what got me through that time was having my husband (then fiancé), Foxy, and Wrigley by my side, supporting me throughout the process. Foxy made sure to stay especially close, always watching out for me. She’s always been attuned to my emotions.

“Now it’s Foxy’s turn to fight lymphoma, as she was just diagnosed with stage V multicentric lymphoma. We were admittedly shocked when we first learned her diagnosis. Given that her main symptom was increased thirst, with no changes to her normal energy at the time, we naively expected the result to be a mild kidney issue at worst. As soon as we learned her diagnosis, I quickly called multiple DMV oncologists to see who could see her soonest, knowing time was of the essence. Now, just as she stayed by my side during my treatment, we want to stay by her side and do whatever we can to help her through this.

“Thanks to financial assistance from FETCH a Cure, Foxy is being treated at Blue Pearl Veterinary Partners in Rockville, Md. Ideally her chemotherapy will allow her to enter remission. Above all, we want to make sure she maintains a high quality of life and enjoys whatever remaining time she has, which we sincerely hope will be a long, long time.”