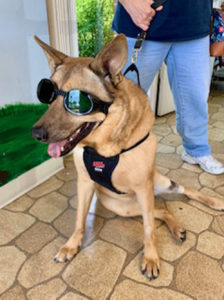 Honey, a 9 year old Belgian Malinois, became a Companions in Crisis recipient in 2018 after being diagnosed with fibrous sarcoma. She is currently undergoing cancer treatments every 8 weeks. She is also receiving cold laser therapy every week to strengthen her hips, knees and shoulders on the legs not affected by the cancer. She’s taking two walks a day, and her moms says her progress has been “slow and steady, but remarkable.”

Here she is sporting her protective eye gear for the cold laser sessions, and looking like a WWI pilot. We are so happy she is doing well!