After 10 years of working and volunteering with shelter pets, many cats, dogs, and even snakes
have significantly affected my life and contributed to who I have become as an animal advocate.
I have worked to bottle-feed orphaned kittens, socialize hoarded dogs, and ensure that owned
pets get affordable medical care in a low-income clinic. I have worked to find pets their forever
homes, convince too many veterinarians to do too many free surgeries, and fundraise for many
different animal welfare programs. Much to the chagrin of my ever-patient family and forever
pets, I have fostered countless cats and dogs, and they have all touched my heart. I have
mourned and rejoiced, I have cried, I have laughed. I have been outraged on behalf of my canine
and feline friends, I have worried, and I have been so, so thankful. I have also been bitten. A
lot. My heart has pounded out of my chest while chasing an escaped shelter dog down a busy
road during lunch hour while the community stopped to assist me, their support bringing tears to
my eyes.

However, no shelter or foster pet has more irrevocably affected me, both as an advocate for
animals and as a human being, than my best friend Quen. Quen (pronounced like Quinn) was
not especially the kind of dog I imagined myself with. He’s active and athletic. I’m lazy. He is
incredibly smart, whereas I have always extolled the virtues of a kind-of-dumb dog who can’t
figure out how to get into trouble. He has no understanding of the concept of personal space and
alone time, while I require both of these things to maintain my own equilibrium. And yet, here I
am, writing an essay about Quen, the one dog who I have tried to move my entire life around for,
and for whom I did rearrange my life for many months as he stayed in our guest room when he
had nowhere else to go. Quen is not necessarily my perfect match, but he’s the only canine
companion for me.

Quen is currently in prison. That’s not a funny term I use to describe an animal shelter, as
people frequently misunderstand. Quen is in a state correctional center for humans in Central
Virginia. He has been a resident of the Pixie’s Pen Pals program since 2014. Run by the
non-profit FETCH a Cure, Pen Pals is a program that takes dogs from local shelters and places
them in correctional centers where they are trained by inmates. This program focuses on
rehabilitation and education for inmates and for dogs who may need extra attention or may be
considered “less adoptable” simply because they are adults, seniors, hounds, or pit bulls. Quen
came into the shelter a young, rambunctious guy who loved to wrestle hard with his fellow
doggie inmate, Everett. He learned quickly and became an inmate handler and staff favorite; he
even caught the eye of the warden, who adores him.

Quen, I have come to realize, is a culmination of all of the challenges in rescue advocacy that I
have encountered during my ten years in the field.

Total​ ​Advocacy–Getting​ ​Ahead​ ​and​ ​Staying​ ​Ahead

One of the best aspects of advocacy I learned from Quen it what I call “getting in front of it.”
This is a physical, mental, and emotional concept: 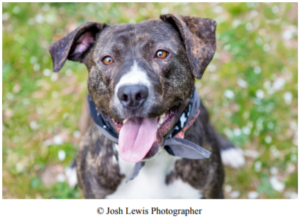 “Getting in front of it” in such a complete way is taxing at first, but now it is all just muscle
memory and mindfulness. This can be applied to every single dog I’ve met, and I see too often
that pet parents do not work to actually understand what their dogs are trying to say to them.

Advocacy for Quen works on three levels: At a practical, hands-on level, I work to keep him
safe and to make sure he is always learning and improving on a daily basis. This helps build to
the next level, which is advocating for his adoption to the best home possible. Pen Pals does this
by finding the best fit for both the adopter and the adoptee, empowering the adopter with the
tools they need to make the new adoption work, and providing follow-up care, including training
consultations, to ensure continued success in the home. Additionally, this level of advocacy also
has me showing everyone Quen’s instagram account (@quenstagrams), plastering his beautiful
Glamour Shots anywhere I can, and just generally spamming everyone I know with information
about Quen.

The third and final level of advocacy for Quen is advocating for his breed in general. Richmond
is a wonderful place to have a pittie, fortunately, but that wasn’t always the case. People like me
and many up-and-coming law students will use their JDs to ensure that breed discrimination is
one day a thing of the past, to demonstrate that dogs like Quen are individuals and not just their
stocky, muscular builds, and to put predatory dog fighters behind bars. For everyone working in
animal welfare, there has at least been one Quen in their lives, and the story hasn’t always ended
well, but as the field evolves, we can prevent more and more pets from becoming sad shelter
statistics through our advocacy efforts.

I will end this Quen-filled essay with more Quen advocacy. Quen is currently available for
adoption through FETCH a Cure’s Pixie’s Pen Pals. Quen is the best dog of all time. He is
about three years old, neutered, up to date on vaccines, and microchipped, knows his basic and
some more complicated commands, and is Canine Good Citizen ready. He LOVES playing
fetch with his ball launcher, chewing on Nylabones, going for hikes, and snuggling while
watching Jane Austen miniseries. Quen is incredibly house-trained and has done well in his
crate for 8-9 hour periods, but also does well when left out of the crate. Quen snores. Quen
doesn’t understand personal space and will drape his entire body all over you. Quen is very treat
and praise motivated, and loves learning new things. He’s also featured in the book 101​ ​Pit
Bulls​ because he’s an incredibly photogenic local celebrity. He is beloved by veterinarians and
prison wardens. He has a range of vocalizations that sound like he’s desperately trying to speak
to you. Quen is very good about knowing and respecting the difference between his things and
your things. He’s great on-leash and even off in controlled environments, and has never tried to
jump the fence. Quen would appreciate if no one ever made him swim again, thank you very
much, but will accept his fate in the bathtub from time to time. Quen loves to play in the snow.
He will also indulge in his foster mom’s silliest costumes and outfits for the sake of his social
media presence. Quen comes with a lot of support from the people whose lives he’s touched,
and this includes support for his future adopter.

Quen is looking for a home with high-school aged children or older, and needs a home without
kitties or other small animals on the loose. Quen has, however, come face to face with turkeys
and smartly backed down–he’s also lived next to chickens without any issues. Quen likes dogs
on a case-by-case basis, and if you have a calmer, older dog who is Quen’s size or smaller and
likes to play, that would be a dream sibling for him. Bully lovers with some previous dog
ownership experience preferred, if only so you can appreciate exactly how he’s the most
handsome, smartest pit bull in the world. Quen may be a good candidate as a PTSD dog.
Contact Emily@fetchacure.com to set up a meeting with Quen and his inmate trainers.

(In the meantime, my guest room is always there for Quen whenever he needs it.)