At this time last year, a sweet, gentle six-year-old pup named Luke entered our Pixie’s Pen Pals program. Through a partnership with the Virginia Department of Corrections, the Pen Pals program places homeless dogs like Luke in correctional facilities to be trained and socialized by inmate handlers under the guidance of professional dog trainers. The program not only lowers euthanasia rates in local shelters, it also provides the inmate handlers with life-long skills. 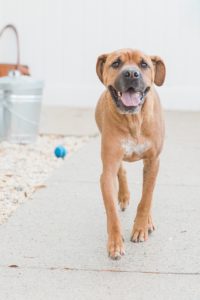 Luke adored his caretakers at the prison. They made him feel safe, and even began carrying him up and down the stairs when he began showing signs of pain in his back legs. As it turns out, his pain amounted to much more than simple knee issues – Luke needed orthopedic (TPLO) surgery for torn ligaments in both of his hind legs. For FETCH, the health of our Pen Pals dogs is a top priority, so the two surgeries, which cost over $5,000, were quickly scheduled.

Now, a year later, and after a long recovery, Luke is living his dream life in his forever home. His parents, Rachel and Tyler, along with their three-year-old daughter, say that it was love at first sight with Luke.

“His cute little wrinkly face and the way he crosses his paws when he lays down was more than I could handle,” Rachel says, “and I knew we had to add him to our family.”

Luke has become especially close to their three-year-old, who loved on him and gave him plenty of “get better snuggles” following his second surgery.

“In just a short amount of time Luke has become our 3 year old’s best friend. He is a constant companion and snuggler with all of us and he has had no reservations in loving us or becoming attached to us […] From the first day we brought him home it has felt like a missing piece has finally been filled and we are so glad we get to come home to his crazy self every day.” 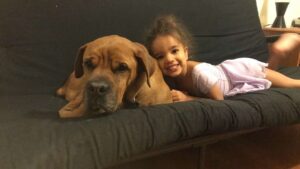 Without the Pen Pals program, Rachel hates to think about what kind of pain Luke would be in or where he would have ended up. Like Luke, other Pen Pals dogs with non-routine medical needs have gone on to be adopted by loving families that can’t image life without their companions.

At FETCH a Cure, we believe in giving shelter dogs in our communities a second chance at life. We’d like to continue to rescue and house dogs with ongoing health issues. But to do so, we need additional support from animal lovers like you.

Luke’s story is only one out of the hundreds of animals we’ve saved through the Pen Pals program. You can create another happily ever after for a rescue dog in need. Please make a contribution today by visiting our Donate Page, purchasing much-needed items from our Amazon Wishlist, or by mailing a check to FETCH a Cure at 5711 Staples Mill Road, Suite 101, Richmond, VA 23228.

Any amount you decide to give will make a huge difference in a pet’s life. Thank you so much for enabling FETCH to help more people and pets in our communities.