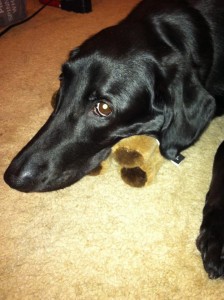 Our precious 8 year old Labrador retriever, Libby, was formally diagnosed with cancer on my 27th birthday. It was a huge shock to us, as it was only found after we attempted to have her teeth cleaned. She had absolutely no symptoms whatsoever. Our vet, who has known Libby since she was five weeks old, was devastated to have to tell us that our baby girl had cancer, and of all places, on the tongue.

Those who have known me for a while know that my dad randomly brought home a dog in a box on the 4th of July in 2005. She was five weeks old, didn’t bark, didn’t move, and wasn’t exactly wanted, to be honest. We kept her, and we have had no regrets. She’s grown from a five-week old ball of fluff with huge feet to an absolutely beautiful dog (she still has huge feet).

However, Libby has not been the easiest dog to care for. She has chewed the paint off walls, put holes in all my socks, torn apart more than one toy, had worms come out her butt, pooped on the living room floor and on the floor on the last day of obedience class, and yes, once she tried to eat a frog. We were lucky with the frog because when it moved in her mouth, her eyes got large, and she spit it out, utterly confused.

She cheats when she plays soccer, by biting the ball and running with it. It took her a good five years to finally get the hang of catching a frisbee. She’s the most uncoordinated thing alive. She’s the Lab that hates water with passion, and has never once been swimming. She refuses to entertain the idea. Trust me, we’ve tried.

She’s got more toys than a two-year old child. When she was a puppy, my sister and I and I would jump on the couch to save our shins—she apparently thought they were chew toys. As a puppy she would rather play with containers and socks than with the multitude of toys we bought for her. She used to run around the house at warp speed. She’s never missed a meal. If you turn your head while eating, she won’t guarantee your food will be there when you turn back. She’s never visited me in Iowa, where I attend graduate school, but she knows that we have a place in Iowa called Woofables, and she gets delicious treats from them. She expects them when I come home for a visit.

She’s the best companion two adult children could’ve ever wished for. I bet she never guessed after arriving at our house in a box that she would be blessed with a family who loves her so dearly, She is our Libby, our Liberty Bell Mason, Libby Bell, Smelly Belly, Bella, Bells, Yibby, and a million other names she’s probably ashamed we call her. And we love her with every bit of our hearts.