While cancer is slightly less common in small dogs, all dogs are at risk of developing cancer in their lifetime. Fortunately, FETCH a Cure’s Companions in Crisis program provides hope and options to families facing a cancer diagnosis with their cat or dog. On average, we fund 20 to 40 percent of the cost of lifesaving cancer treatments for pets like Ginny and Rugby, the two Dachshunds featured below, who both received CIC grants to make their cancer treatment possible. 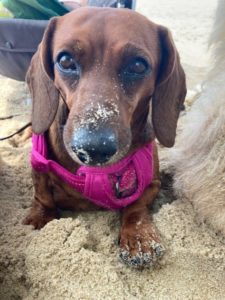 “In the beginning of 2021, our sixteen-year-old Dachshund passed away from a combination of cancer and late-stage Cushing’s disease. She had been my family’s dog all through high school and, when my mom was going to have to give her up when her housing situation changed, we took her in and moved cross-country with her. We have taken in two other rescue dogs over the years, and Choxie (our old girl) was far and away the alpha. When she passed, we expected one of our other two to step up and claim the role. However, several months went by and the dogs just kind of languished and stopped being excited about most things. I don’t know what the mourning process is like for dogs, but I am very confident that is what we were witnessing. My wife and I decided to put in applications at several rescues around the area, not knowing what we would find or if we would be ready to adopt when the time came.

In April of 2021, Ginny came onto our radar through a contact at the Mary Ann Morris Animal Society. We figured that we would never be able to find a Dachshund mix up for adoption, let alone a purebred. We applied, and out of dozens or applicants, our crazy three dog house was chosen. We attached almost immediately at our first visit and we took her home that same night. She has all of the personality that Dachshunds are known for, but with an extra dose of sweetness and affection.  We loved her from when we first met and couldn’t imagine our family without her.

Ginny has had severe medical complications since we adopted her. She has had a persistent wheeze and cough that seems to worsen with heavy pollen exposure, but never completely goes away. Our original vet in Fairfax requested an X-ray and echocardiogram on her after hearing a murmur, and used that data to determine that she had an enlarged heart and didn’t have long to live. We got a second opinion from our current vet, and he re-examined the imaging and determined that her problems were entirely lung-based. We had her lungs sampled and cultured and they came back clean from any foreign infection-causing body. Her last round of images were the first to show a distinct tumor in the lung, but she has had respiratory difficulties for as long as we have had her.

All in all, in our time of ownership, we have spent somewhere north of $2500 out-of-pocket for Ginny’s imaging, diagnostics, and medication. Going through all of that just to find out she has cancer is unbelievably devastating. We know she has so much more life to live and love to give.” 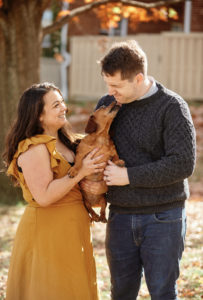 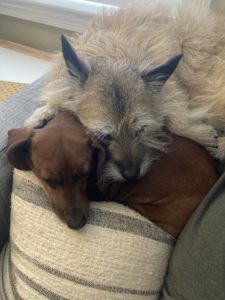 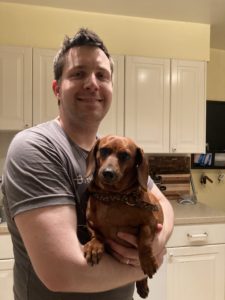 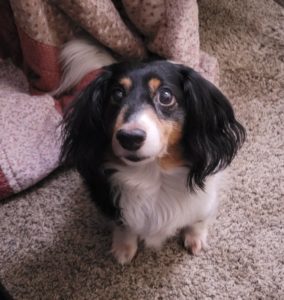 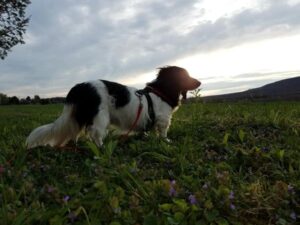 “Rugby has been my best bud for 12 years now; he was born right here in Virginia. My mother had Dachshunds and Rugby came from one of the litters. I was in Alabama at the time, and I knew he was mine the minute I saw him. He looked like a weird little guinea pig. So I returned to Virginia to pick him up. He made the trip back to Alabama with me by plane, and he wouldn’t stop crying unless I was holding him.

After all this time, I still won’t go anywhere without him. He has gone to 8 different states, swam in the gulf, loves a good ball, and becomes quick friends with anyone that will throw it for him.

In May of 2021 Rubgy went in to his regular vet for a routine visit, and we decided on getting his teeth cleaned, but he had a slight heart murmur, so before that they requested we do an ultrasound. Instead of coming home with sparkling teeth, Ruby came home with news of prostate cancer.

We immediately reached out to Dr. Stewart at the Regional Veterinary Referral Center. Rugby started chemo less than a month later. He did great, they saw a little improvement, but for the most part it stayed steady and he handled it like a champ. Once the rounds were finished, he switched to Chlorambucil and Piroxicam and remained on that and was doing good for several months before August 2022.

Ruby wasn’t feeling good, he wasn’t eating, had puss coming from his bladder and things just weren’t going well. We took him to the emergency vet because everywhere else was full and couldn’t see him. They informed us that his prostate seemed enlarged and was pushing again his bowels and kidney. Dr. Stewart suggested radiation, but it wasn’t in my budget so we started him on IV chemo again. He seemed to be doing better, but three visits in the imaging showed the prostate was larger, not smaller, despite what we were feeling. He still seems steady, but Dr. Stewart recommends radiation or taking him off the chemo.”

FETCH is honored to be able to help both Ginny and Rugby receive the lifesaving treatment they need so they can spend more quality time with their loving families.