Carol and Ruby: A Dynamic Duo

The following excerpt was pulled from Ruby’s mom’s GoFundMe Page. 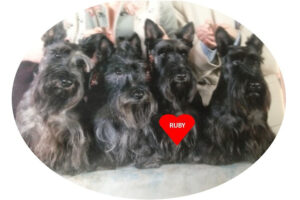 Scotties are known as the “die hards”, who just keep on going and going despite challenges they face. Scottie owners also often share similar “die hard” traits. Carol Joyce Shraison and her Scottie lass Ruby are excellent examples, and they need a little financial help now. Ruby needs advanced veterinary care for radiation therapy to eradicate lung and bladder tumors. The cost of the treatment is beyond what Carol can finance on her own, so we’re asking her many Scottie friends to consider helping her raise the remaining funds she needs (approximately $6,000.00).

One beneficiary of Carol’s nurturing is O’Riley’s Balgair’s Kaleidoscope… known as “Ruby”. Carol is Ruby’s breeder, and welcomed the little girl into the world on May 8, 2007. Ruby has had a loving home with Carol and other companion Scotties since the day she was born. Ruby raised several litters of pups one of whom, Indigo, is soon to become a mommy herself and add lots of puppy fun to Carol’s household. (In this picture Ruby is cuddling with her tiny newborn daughter Indigo.) 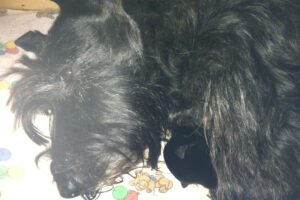 Both Carol and Ruby were, unfortunately, destined to experience major health challenges- the reason for this GoFundMe effort.

Carol was stricken with a life-threatening stroke in 2015 which temporarily robbed her of her consciousness, mobility and speech. Initially given little chance for survival, an encounter in the hospital with an animal therapy dog from the “Dogs on Call” program reawakened her will to live. (You will enjoy hearing Carol talk about this experience in this short video: https://vimeo.com/album/4096892/video/186433619) Carol worked tirelessly to regain her independence and quality of life. After all, her Scotties needed her!!! She had to learn to walk again despite weakness on her right side, to feed and dress herself, and to speak understandably. To continue with her love of Scottie grooming she even taught herself to strip left handed! She now lives independently, works a few hours a week at a local legal office to refine her speaking skills and build her physical strength, and takes care of her three Scotties.

While Carol was overcoming her own health challenges her Scottie girl Ruby was doing the same. Ruby was diagnosed with a lung tumor 2 ½ years ago; a recent CT scan showed that the tumor has not significantly increased in size it can likely be erradicated with radiation treatment. In 2019 Ruby was diagnosed with TCC bladder cancer- unfortunately all too common in Scotties. Ruby had surgery in 2019 to remove the bladder tumors but in April 2020 they returned. They are located in a position in the bladder where the oncology vet believes they can also be successfully treated with radiation.

Ruby is described by her Carol as very hardy, active and playful, and otherwise healthy. She loves to chase balls- the bigger the better- and to sleep on her huge plush green dinosaur. Many of the Scotties in Carol’s O’Riley’s kennel line are long-lived, several having reached 15 years of age. Carol’s oncology veterinarian believes Ruby’s post-radiation therapy prognosis is very positive- and could perhaps allow her several more years of quality life. 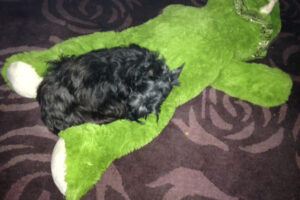 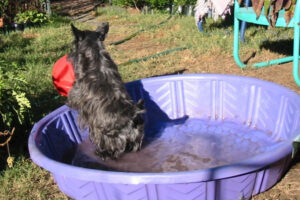