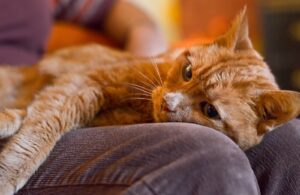 I have had Butterbean since he was born in March 2000. I was there for his birth because it was in my parent’s house. My mom named him because she said he looked like a butterbean. She also used to call him “Nosy Nate” because he liked to always get into things and see what everyone was doing.

I went to college at Old Dominion University in the Fall of 2000. After living in the dorms my freshman year, I got my own apartment for the next school year. I brought Butterbean and one other cat, Oscar, from my parent’s house. Turns out Oscar did not like being a “Norfolk kitty” too much and was homesick. I brought him back home after the first semester. But Butterbean… he thrived in the college atmosphere! He loved to hang out with visitors and my roommate and I. He even had his own recliner in the living room and he was loved by everyone. He has always been such a social butterfly!

After graduating college, I have since lived in Chesapeake, Springfield, Manassas, and most recently back in Richmond. Butterbean has gone everywhere with me. He’s seen all of my adult relationships and has even been through a marriage and recent divorce with me. I consider him my best friend because he has been through just about everything with me and has always loved me unconditionally. Some would say he is too cling with me but I wouldn’t have it any other way. We have a very strong bond

Due to the divorce, I moved back to Richmond in March. I noticed his health declining around late May into June. I thought it might have been due to the move from a big house into a little apartment or because he was getting older… But he started losing weight on a steady basis and he seemed disoriented. I decided to take him in for a senior screening and check-up in early July.

The doctor I went to seemed really nice. He did blood work among other things on Butterbean. I received a call a few days later that Butterbean had hyperthyroidism and we began treatment. I brought him in for follow-ups and it was not really getting better. After a visit with an emergency veterinary hospital in August, it was determined that Butterbean was misdiagnosed. Due to numerous frustrations and lack of communication I won’t get into in detail with that clinic, I received a partial refund for the misdiagnosis and unnecessary treatment that lost Butterbean over a month and a half of time.

After the emergency visit, it was recommended that Butterbean have an internal ultrasound conducted to find out what was going on. The ultrasound did not show anything that could give him a definitive diagnosis. The next recommendation was to treat with medications or have a surgical biopsy on several internal organs.

I decided to return to the veterinarian that I had grown up going to with all of our family pets, Dr. Susan Ware. I initially did not go to Dr. Ware when I first moved back home because her clinic is a good 25 minutes from my apartment and Butterbean is notorious for getting car sick and making his cage and himself really messy with even the shortest of car rides. But I knew it was time to go to someone I knew and trusted based on past experience.

I decided to attempt to try the more conservative and less invasive approach with medications to see if Butterbean began getting better. I knew surgery would be risky for a cat his age and I was hoping that he would not need the biopsies. After a few weeks of antibiotics and other medications, Butterbean was not getting any better. Dr. Ware performed the surgical biopsy in October. Several days later, I got the call that Butterbean has lymphoma.

Butterbean has been undergoing chemotherapy since late October. The first week he wasn’t eating very much. An appetite stimulant for a couple of days fixed that and he has been eating and drinking water ever since. His appetite is actually what has continued to give me hope throughout this emotional time. A couple weeks ago, I mentioned to the vet that he was breathing with his mouth open while purring. He was given a chest x-ray to see if fluid was building in his lungs (which apparently would have been a sign that things were probably coming to an end). Luckily, there was no fluid seen in his lungs. Our next course of action is to re-ultrasound him to see if we can learn more of what ‘s going on.