Sherman: From Chained and Forgotten to Lovable Rascal

Sherman: From Chained and Forgotten to Lovable Rascal 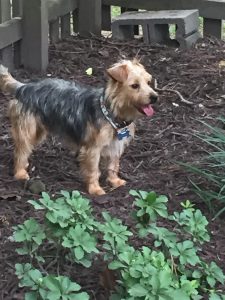 In early March 2016, Sherman, a 3 year old, 16lb Norfolk/Yorkshire Terrier mix came into Pixie’s Pen Pals from our friends at the Southside SPCA. His arrival was unusual because he was what we in the biz call a “small, special breed dog” with no medical or significant behavioral issues; he was “super adoptable” and we hadn’t had a Yorkie mix since I came into the program in September 2014. However, Sherman had been adopted and returned twice:  one home didn’t have the time to train and work with him and the other home had a dog that wasn’t a huge fan of Sherman. Anyone who has known a terrier knows that they are very smart and energetic and need to stay busy. So, he came to us to channel that energy and intelligence into good behavior, obedience training, and socialization with people and other dogs. 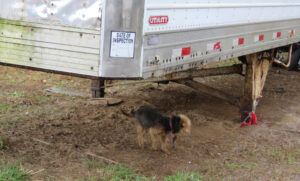 Sherman is amazingly social and playful despite the first few years of his life. He was originally seized by Lunenburg Animal Control with about a dozen other neglected dogs. Sherman was found in a backyard, chained up to a stationary tractor trailer. After he was seized, he made his way over to the Southside SPCA where he began to learn what it’s like to be a pet and not just someone left out in the yard, forgotten.

When you aren’t being taken care of, resources can become valuable. Sherman suddenly had regular access to water and food and beds and people and toys. Sherman loves his toys and needed to work through toy guarding from other dogs so that he could find his forever home. Through our program, Sherman learned quickly that he was safe and loved. He was quickly house-trained, crate-trained, and learning all of his cues, especially if his trainer had his favorite toys in hand. He learned how to share, he learned to expect to be cared for.

A cutie like Sherman had a lot of interest, but luckily, one of the early applicants turned out to be a great family with experience with terriers. In fact, their current dog, Chyna, was a rescue who had a rough start as well and learned to like people and other dogs over time. When Chyna and Sherman met, they got along right away, and once they were in the home together, they bonded quickly.

Sherman’s mom, Melinda, had this to say about Sherman after about a month in the home:

“Sherman is finding his way. He is a rascal that deserves considerable watching. He is now sharing toys with Chyna, and they are like two toddlers: if one has a toy, the other immediately wants it. Sherman is learning about sharing and is less guarded about toys in just two weeks. They start their day with an early morning wrestle, and pretty much end the day in the race up the stairs to bed.  Sherman has trained Gary and I [to pick our] things up. He steals socks, shoes, underwear, and then does victory laps around the house while we try to catch him! Best game ever!  He is a joy and a pain, but he seems so happy. He loves the backyard, but not so keen on tall grass. A few days after he came home he was lying on the deck, and I watched him just looking up at the blue sky. I swear he was just soaking in the ‘goodness’ of the day.” 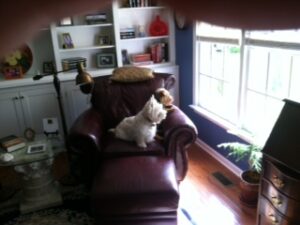 Sherman and Chyna Being Nosy Neighbors

In another update last month, Sherman’s mom let us know that he had, with the help of training and medication, become a more loving, bonded, and connected dog with his people. Being chained for most of his life had stunted his emotional development, which is fairly common with dogs who come out of hoarding or puppy mill situations. While Pen Pals gives a dog the foundation they need to find their forever homes, we also give the adopters the tools they need to continue with their dog’s education. Sherman’s parents have been wonderful enough to continue to develop Sherman’s emotional and behavioral intelligence.

If you’re interested in helping dogs like Sherman through adoption, donations, or volunteering, you can find out more about our program at www.fetchacure.org/pen-pals. August 1, 2016