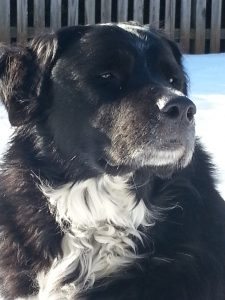 I adopted Baloo 7 1/2 years ago from a local shelter. He had been dumped out the back seat of a car onto a sidewalk in front of a gift shop. He was not neutered and had entropian, so his eyes had been getting irritated his whole life. He had surgery as soon as I adopted him and he always had a great attitude. He loves everyone he meets and is the most sociable dog I know. He is well known in the neighborhood, and is always looking for new friends. The diagnosis last Wednesday was quite a shock, he does not seem that sick, but I was told that he would go downhill quickly without treatment. That happened about 3 pm on Wednesday and we were at Dr. Manley’s office at 11:30 on Thursday morning where he had his first treatment. I have adopted 2 dogs from Pixie’s Pen pals, Rodger Dodger on December 10th 2010, he was at Lunenburg, and Benji (aka Bazinga) on October 17th 2013 from Fluvanna.

2/3/2016 – Baloo had his final chemo treatment on Thursday, it has been 6 months already. He is still doing well and hopefully will continue now the treatment has stopped. He and Dodger have been to the beach twice and to Skyline Drive twice. We are planning another beach trip in a couple of weeks, weather permitting!  Everyone is loving all the snow. Dodger loves to roll and drag himself along it and eat it, Benji was the only one strong and athletic enough to run through it when it was 30 inches deep, and Baloo just loves to be in it. Rosa only thinks it’s fun for a very short time then she runs inside.

3/22/2016 – We just saw Dr. Rusk last Thursday for a check up. Everything is good, got the results of his latest bloodwork today, and that was good too. His platelet count, which has been low through his whole treatment, has started to improve. Our next check up is on March 16th. Other than some thinning hair, and looking a little straggly, he has handled his treatment beautifully. Baloo is happy, full of energy and managed to gain weight during chemo (he got a little spoiled

). We just had another trip to the beach (his 3rd since October), a week ago, were on the beach in wind chills of 10 degrees, and it also snowed. I had Dodger with me too!  Since October we have alternated between beach at Kill Devil Hills and Skyline Drive.

3/24/2016 – Baloo had his checkup last week, 7 weeks post chemo, and all is still good  His hair has thickened up almost back to normal, just his tail is still a little less hairy, but hopefully will come back as well. We go back on April 14th, pretty much every 4 weeks as long as things are going well.

6/29/2016 – Baloo just had his monthly exam plus blood work and happy to say everything is still going really well. Still in remission and he is feeling great and enjoying the summer. He is now at 11 months since diagnosis and 5 months since his chemo ended. Hopefully we will be back at the beach in a few months!