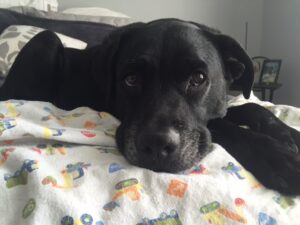 From the day I met my Baby Jack (black lab mix) as a 4 month old puppy at the rescue, I knew he and I were destined for a great journey together.

He was there for me through everything and we shared so many wonderful adventures together in his 8.5 years. He would watch me out the window and would be there at the door greeting me at lunchtime and after work each and every day. He was my VCU basketball buddy, we did fun day trips to all different places (usually with his cousins). We had so many fun adventures, I cannot even begin to count them all. He was always there to snuggle at the end of each day and I cherish those times, and just the regular day to day time with my sweet boy.

On February 14th, 2016, Jack came over to me and I noticed a small amount of blood coming from his nostril, I thought it was strange since he doesn’t get into things. I made an appointment at the vet that Tuesday and they said it could be a variety of things, his airways were clear, but they did not see anything up there, so sent us home with some drops and said if it continues we will need to do further testing. It continued that week, so I called on Thursday and our vet got us set up with in with an internal medicine doctor at Dogwood the next day. She said it could have been a variety of things with nasal cancer being a possibility, but being that it is a rare cancer, it could have very well been rhinitis too. We scheduled the MRI for that following Monday with a fast read so we would get results the same day. I dropped him off and could not stop crying and went on my way to work. That afternoon on February 22, 2016, I got the call that he had an aggressive nasal mass that had breached his brain already and my world was turned upside down. 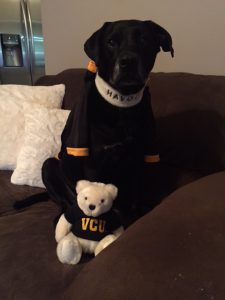 Jack is and always will be my baby, so I started researching everything that could possibly be done for him. I got him set up with Dr. Lord at Four Paws Holistic and Dr. Waite at The Oncology Service. He started on many different holistic supplements and Piroxicam and Palladia. Radiation is the primary treatment for nasal tumors. I opted against radiation as I would have to have dropped Jack off in either Northern Virginia or North Carolina for a week at a time. Jack hated being away from home, and it was not something I wanted to put him through especially with how aggressive it was and not knowing if it really would have given him that much more time. I wanted his time to be spent with me together. There was a chance the Piroxicam and Palladia (chemo drug) could have shrunk it or slowed it’s growth. He did really well for a couple of months, you never would have known he was sick. He was eating, going for walks, running around, playing with his toys, his happy self. His doctors were all very impressed with him. 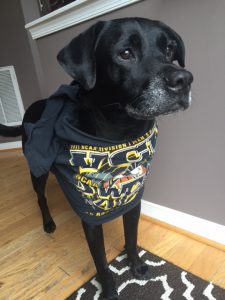 Then on April 27th I came home at lunch and he did not come downstairs to greet me, I ran upstairs and he was laying on the bed and could not move. I called my Dad and we rushed him down to Dr. Waite and found out that it was a seizure (that is a symptom of nasal tumors once they reach the brain). We took him off all medications and supplements and were going to try one more medication for the seizures. He and I had a very relaxing night, I just sat with him and snuggled with him and told him how much I loved him. He did not jump on my bed as he did every single night to go to sleep. I worked from home the next day and another seizure hit, I was there for him that time and was able to comfort him. That seizure did something to him, he could not move at all again and the sparkle in his eyes was gone, he told me it was time. I called my family and friends and made the decision to say Goodnight to my Sweet Jack that afternoon on April 28th. I told him we are not going to say Goodbye, but we are going to say goodnight since I know will see him again one day.

My nephew who is almost 3 came over to see him and he said the best thing anyone could have said to me that day. We were sitting there with Jack and I told him where Jack was going and he asked me if he was going in a helicopter. I told him yes, he’s going in a helicopter, so now whenever I see one I know Jack is checking in on me, Jack was definitely listening to him that day. 2 weeks after he went to sleep, I was driving down the highway and a helicopter came fairly low right over my car and rode with me and then took off. I could not believe that happened (I rarely see helicopters) and knew Jack was there, it made me happy knowing he will always be there and will alway be with me.

Dr. Waite’s team told me about Fetch A Cure and what a great organization it is. I know they are bringing radiation to Richmond, which is going to be such a great option for so many animals. It will be nice to have an option where they can go for the day for treatment and then go home at the end of the day where they belong. I’m also in touch with vet schools across the country to learn more about nasal cancer and have gotten so many great responses from them and know it is something they are doing research on to learn more about as the symptoms don’t appear usually until it’s in it’s late stages. So now in Jack’s memory I want to get involved and help other dogs who have to fight cancer.

This was just a very small part of our journey, I have so many wonderful memories with Jack that will live on with me forever. He took a piece of my heart with him and I have his whole heart and know that he is waiting for me and I will get to see him again.

As I told Jack every night…Goodnight my Baby Jack, sweet dreams, let me know if you need anything, I love you.