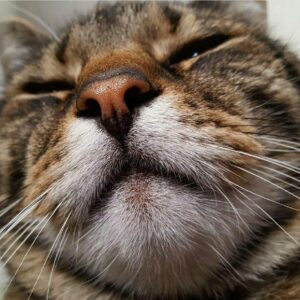 Harley, a cat in Alexandria, is our latest Companions in Crisis grant recipient. He is being treated at Del Ray Animal Hospital for lymphoma.

“At four months old, Harley was taken to an animal shelter by a mother of a toddler who bit the kitten. After hearing that he was surrendered for protecting himself, I adopted Harley and another cat named Tessa. From day one he has always looked after his feline sisters. He would yowl at me if their food dish or water bowl were empty or if the cat box needed to be cleaned.

“Now Harley has a half-brother, who is half Siamese. He’s the same age as Harley, and started losing his sight about a month ago, Harley plays his bodyguard and seeing-eye cat. Or he did until about a month ago, when I noticed he wasn’t eating like he usually did, nor drinking or using the litter box. Harley has always been a big solid cat, but when I picked him up to brush him (a favorite), I noticed he not only looked smaller, he wasn’t solid anymore.

“When the vet asked me how old he was, I was shocked to realize he wasn’t the kitten I had adopted 14 years earlier. After feeling his tummy, she had that look — the one that all doctors have when they tell their patients about their terminal illness. Harley knew; he buried his head in my arms as I put my head to his and covered him as she went on about letting him go.

“FETCH a Cure is the first place I have found that can help me relieve Harley’s pain and suffering. He’s been my baby his whole life, and I’m not ready to give up on him.”