Tyson Fights in Round Two

Tyson, who received a 2020 CIC grant, is now a 2021 recipient also as he continues his treatments for lymphoma. His mom Chase tells his story: 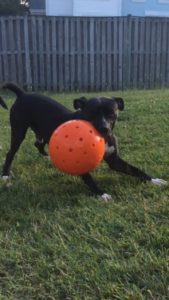 “I adopted Tyson from Baltimore Animal Rescue and Care Shelter (BARCS). As I walked by his cage, the lovable pitbull mix just looked up at me quietly with those big brown eyes, as if telling me that he wanted me to rescue him. He looked so cute, sitting there quietly, and seemed to have the best manners. Little did I know that, at age two, he was still full of puppy energy! I went back the next day to get him, and it was one of the best decisions I have ever made. He was there for me in 2016 when my parents split, in 2017 when my grandma died, in 2018 when my mom died, and in 2019 when I had to put down two of my mom’s old cats that I had inherited. Coming home to his wagging tail, big smile, and beautiful brown eyes made each day just a little bit easier.

“In October 2020 I found two lumps on either side of Tyson’s neck. After an emergency vet appointment, pathology report came back with a diagnosis of stage IV lymphoma. Unfortunately, as I called at least 10 oncology offices in Maryland, each of them told me that due to COVID and lack of PPE, they were booked weeks or even months out. I knew that was not acceptable because of how aggressive Tyson’s lymphoma was. His swollen lymph nodes quadrupled in size after they aspirated, and spread throughout his body. I knew I had no time to waste. Thanks to a last-minute cancellation at Towson Atlantic Veterinary Internal Medicine and Oncology the internal medicine doctor with the opening worked with the oncologist to determine the severity of Tyson’s lymphoma.

“After x-rays, ultrasound, bloodwork, and urine tests, they determined that Tyson needed chemotherapy ASAP to survive another week, so he had his first preliminary chemotherapy treatment that afternoon. When we picked him up that night, he was said it was due to the lymphoma quickly taking over his body and the strong double treatment he was given. I slept on the couch with him because he could not climb steps and in case he needed to go out in the middle of the night. He was so weak that he peed in his sleep. However, within 48 hours Tyson was back to his old self again and within 72 hours his lymph nodes were already shrinking!

“The decision I made that day was not an easy one. Many people told me I was poisoning my dog, killing him faster, and that it was not fair to give him drugs because he did not have a voice. But I knew that if Tyson did not have that round of chemo that day, he would not have lived another week. In my eyes, the chemo that they have injected into his body was liquid gold that saved my dog’s life!

“Tyson has yet to have any real side effects from the chemotherapy. Within 48 hours of treatment, he is always back to his old self. Seeing him sunbathe on the back deck, bark at the guys mowing the lawn, chase the Amazon van, greet me at the door when I come home, and cuddle with me at night, has made this all worth it. The only difficult thing was that towards the end of his multi-agent protocol treatment plan, which we were doing every other week, his lymphoma started to develop in other areas. The first time they showed up internally on different parts of his body, and the second time they appeared under his skin. Therefore, the doctor and I decided to do chemo every week as long as he continues to do well and has no side effects.

“The hardest part for me has been the cost of all these treatments. At first, I got a care credit because I thought that would be enough. I soon found out that $1,000-$1,500 per treatment adds up fast. After three weeks of those charges, I realized I could not afford this by myself. I reached out to BARCS, where I adopted him, who reassured me that there were ways to get financial aid. The biggest challenge I found is that if you are not poverty-stricken you cannot get help.

“I knew I could not give up so I kept searching and found more than 50 organizations that would help animals and people in need. I probably applied to 30 different ones to get help paying for Tyson’s treatments. As of today, February 2021, I have found seven organizations that offered me grants. Some might’ve only been able to provide me with $200, but others were able to provide me with as much as $2,000. Every little bit helps! I continue to search weekly for additional organizations to apply for financial aid since I am only on week 14 out of 19 of Tyson’s treatment plan.

“Through this long and challenging journey, I have discovered that there are a lot of people out there that care for animals as much as I do. Tyson continues to do well with his treatments; therefore, I will keep them up as long as he is a healthy and happy boy! I hope this gives everyone hope that there is help available, you just need, time, patience, and a list of resources. If you don’t know where to start, ask your vet, or talk to your local rescue, shelter, or Humane Society.

“I am grateful to FETCH a Cure for helping me face this challenging situation.”