Marley’s mom knew that they were meant to be. During Marley’s 12 years, she’s been adored and well taken care of 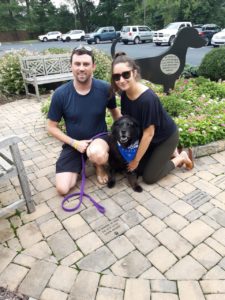 during every phase, stage, and surprise. Yesterday, she finished her last round of radiation in her battle against cancer. Her parents are so proud and have shared that Marley is still smiling and wagging her tail. With the support of our Companions in Crisis program, Marley and her family were given hope and options in the face of a pet cancer diagnosis. Treatments for cancer are not inexpensive, but with the support of FETCH, we’re hoping Marley and her loving family will be able to create many more sweet memories together. Read more about Marley’s story below: 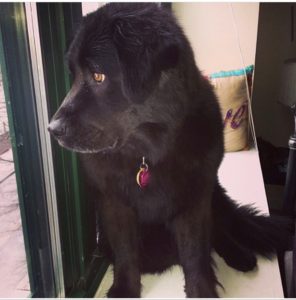 During the first semester of my freshman year of college in the fall of 2008, the professor of my University 101 course required all students to complete community service. I opted to volunteer at Pets Inc., a local no kill shelter near the University of South Carolina, where I was enrolled. There, I met Marley, who was believed to be around 8 months old at the time. Undeniably, it was love at first sight. I couldn’t believe that anyone could have surrendered such a beautiful, sweet and gentle soul – but boy, did I feel lucky they did. We were told that the girl who gave Marley up was moving and couldn’t take her. Her tremendous loss was my greatest gain. 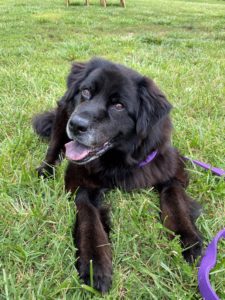 Since I was living on campus without a car at the time, I would beg friends to drive me to see her. I would also call Pets Inc. often to make sure that no one else had adopted her, and talked about her with anyone who would listen. Finally, my mom came to pick me up and bring me home for winter break – and asked if I wanted to formally adopt Marley and take her with us. She knew before meeting Marley that she was meant to be a major part of my life and our family of dog lovers. We brought Marley to my parents’ house that Christmas, and the rest is history…

Marley lived with my parents during the second semester of my freshman year, while I was still living in a dorm, until I came home to her that summer. The following semester, Marley and I moved off-campus, where we stayed until I graduated in the spring of 2012. During December of 2012, I was asked to move to Richmond after receiving a job offer there. And just like that, Marley and I were off on our next adventure. We 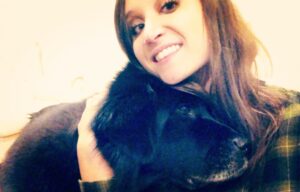 headed to RVA, where we didn’t know a single person, and rented our first apartment together. Then, in May of 2016, I purchased our first home – primarily so that Marley could have a backyard of her own.

The memories that we have made together over the past 12 years are some of the fondest memories of my entire life. I can recall so many car rides, road trips, shared meals and snuggles. She’s been there through so much good and helped me through the bad, and now more than ever, I will continue to do the same for her. She truly is my best friend and the longest relationship that I have ever had. The idea of opening my front door after a long day and seeing her face is what I most look forward to, and not having her on the other end is my biggest fear. That being 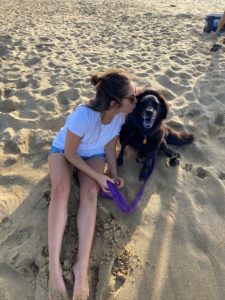 said, I have tried hard to take very good care of Marley over the years. We have stayed up-to-date on all of her medications and visited the vet regularly. As a side note, Marley was diagnosed with copper storage disease around the age of 5, which required special surgical diagnostics, in addition to a lifelong prescription diet and supplements. As a result, Marley has had no challenges with her liver and the disease has been well-managed.  As Marley got older and started seeming arthritic, I would take her monthly to get acupuncture and other treatments to help soothe her discomfort. In April of 2020, Marley tore her ACL, requiring surgery. There was no injury – this was just the result of her getting older. Despite her age, however, she recovered so well and so quickly, just like she did following her biopsy three months later. Her continuous determination is what gives us confidence that she can beat the odds when it comes to cancer.

Marley’s knee surgery, like her entire cancer journey, occurred during the era of 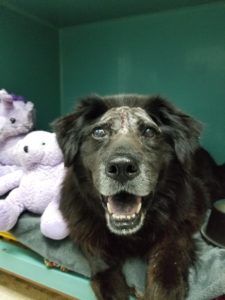 COVID-19. Because of current restrictions, I haven’t been able to accompany Marley to any of her appointments. I’m not allowed to sit with her, pet her and tell her that everything is going to be okay while she gets poked and prodded at. It hasn’t been easy… Of course, I have always been aware of the devastating reality that I don’t get to keep Marley in my life for as long as I wish I could, but I suppose I always hoped that the amount of love that I feel towards her would somehow be enough to help keep her around for as long as possible. Never in my wildest dreams did I think that I would receive a call informing me that she has cancer, and that it had spread to her brain. But my worst nightmare was realized in July of 2020… And I would give anything in the world to be woken up from it.

On Sunday, July 5th, we took a walk on a beautiful summer evening to wrap up the holiday weekend together. Marley was happy. Then, she quietly woke me up several times in the middle of the night, seeming restless. It’s very unusual for Marley to do this. I took her outside twice, figuring that she needed to use the bathroom, and both times she just laid down instead. The next morning, she was worse. Her lower eyelids were extremely droopy, and she didn’t want to open her eyes at all. She was also panting heavily. I was obviously afraid, and brought her to the vet, where they told me that they didn’t think she 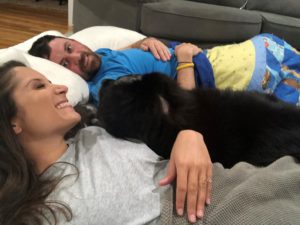 could see out of her right eye, and needed to be evaluated by a neurologist. We made an appointment for the following day. The next morning, Marley was worse. She had an accident in her bed overnight – which she has never done – and was extremely unsteady on her feet. Being Marley, she saw me sitting on the ground, visibly upset, and despite her discomfort, wobbled over to comfort me. She’s just the best.

That morning, the neurologist conducted an evaluation, MRI, bloodwork and a spinal tap, as they suspected it could be a fungal infection in her brain. We prayed that’s what it was, as an infection can go away. Imagine – hoping for a brain infection. The neurologist sent the MRI images to a radiologist for a second opinion, and called a few painstakingly long days later to deliver the news that he believed Marley has a tumor that originated in her nasal cavity and has spread to her brain… And that she may only have 9 months to live. 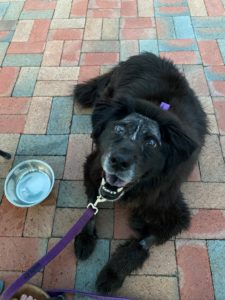 The following week, another neurologist performed a biopsy, by cutting into Marley’s head and through bone, to the tumor outside of her brain. The results confirmed our fears… Marley has carcinoma. Although, aside from the patches of fur missing on her head and other parts of her body, more days than not, you wouldn’t know it. I know the medicine she’s taking, like the steroid Prednisone, is helping with this, but she really has been SUCH a trooper. She’s had a couple of bad days where she’s been lethargic and had droopy eyes and obvious challenges with her vision, but most of the time, she has been smiling, wagging her tail, upbeat and alert, prancing around and looking (nonstop) for food. She’s been herself. I hope and pray that Dr. Holmes at The Oncology Service can help her keep being herself for as long as possible. As a side note, my fiancé and I are planning to get married later this year, and there is nothing we want more than to dance with our girl on that day.

Marley will begin radiation in early August. We cannot afford to prolong or waste a moment. We have faith, we are ready to fight this disease with everything in us, and we are extremely appreciative of the resources available through FETCH A Cure. I am a 100% commission-based salesperson, and my income has obviously been affected by COVID-19. Additionally, Marley has clearly had many medical expenses this year, including a biopsy of the tumor, 2 MRIs, CT scan, ultrasound, spinal tap, analysis of her lymph nodes, x-rays, bloodwork, various evaluations and more. This does not include the diagnostic testing and subsequent surgery she had on her knee in April. The steps we have taken to get her cancer diagnosis have caused us to exceed the $15,000 of coverage allowed by our insurance company per year, before even beginning treatment of this disease. Now, all testing, planning, radiation and any other expenses incurred prior to mid-October of 2020 will be 100% out of pocket. That being said, the work that FETCH A Cure is doing is of the utmost importance.

I work for NBC12 – and actually, some of my clients and co-workers work with or know members of your organization and think highly of the work you are doing. I would be more than happy to volunteer my time (and the time of my loved ones) to help support your cause in any way that we can! I feel so fortunate to have found FETCH A Cure, and thank you in advance for anything you can do to help Marley fight cancer. My hope is that your organization can give a voice to her case, in order to help other dogs just like her for years to come!