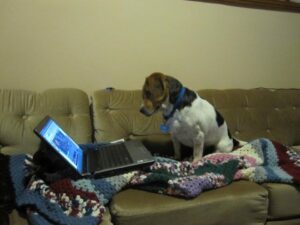 We first saw Gus on Petfinder.com and knew immediately that he was the one for us. We were looking for a Beagle, sex didn’t matter. Since we live near Baltimore, MD we both had to take a day off work to drive the 5 hours to get him. We brought our other rescue, a Belgian Malinios, Candy with us. We needed to make sure they would both get along. When they met neither one really paid any attention to the other, I was not sure if that was a good sign or not. Gus was very scared of most things, including my husband, Bob. Candy was able to teach Gus how to be a pet and how wonderful life is!! She taught him how to climb steps, another thing he was afraid of. We have 3 acres fenced but we still need to walk Gus on a leash because he didn’t know how to come when called. I used Candy and the clicker to teach him to come when called and that didn’t take long, since he is a beagle (food hound). He was afraid or nervous of even being petted so I taught him that human touch was not going to be a bad thing. I would massage him and he loved that! We both would feed him by hand in order to get him used to both of us. He warmed up to me much faster, he is still more nervous around men than women. We take him camping and he loves it! Now he lets anyone come up and pet him! Even kids, where he used to be nervous around little kids.  I am sure our house was the perfect place for Gus because it is just my husband and me. We both treat him the same, so as to not confuse him. Gus and Candy do not need to prove who is boss, they are so the same in that way. Neither is alpha and neither is omega. Our house is very quiet, we live way out in the country, not near a road/traffic. There are many reasons why Gus fit in so quickly. One is because of his relationship with Candy. We don’t have any kids. Our house is quiet. He needed all these things to be able to adjust to life as a pet in a house. When we got Candy as a 4 month old pup, our other Beagle, Belle taught her all the ins and outs of being a pet. Now she is the one teaching Gus all those good things she learned!  It took Gus 6+ months to adjust to life here, but it was no doubt the best thing for him. He nows plays with us and his toys! He barks when Candy does, if someone is at that door or if someone comes in the yard. Now he lets anyone pet him.  I remember when he first saw the TV on, he would bark at it!! It took him months to get used to the TV. Then when I would watch PetTube on the laptop he would sit and watch!! Sometimes sniffing the screen or looking behind the screen! He would never walk in front of us, now he does! As a Beagle he loves to go out in the yard and field to run around and sniff everything!! I am so glad that we have so much to offer him.

Gus has turned into the dog he was always meant to be. We could not have asked for a better dog!!