Pen Pals Program – The Road from Handler to Owner

The Pixie’s Pen Pals Program depends on a lot of people to be successful.  We have the FETCH staff that administrate the program and do boring things like food orders and fielding inquiries about our dogs, the skilled and experienced trainers that give our program the training knowledge it needs, the volunteers who taxi our dogs back and forth to vet visits and adoption events, and the vet staff that keep our dogs healthy.

The most important of all though, are the inmate handlers that train the dogs in prison, and the adopters who then give them a lifelong home.  One of our newest Pen Pals alumni is both.  Lucian was an inmate handler at Deerfield Correctional Center where he trained seven of our Pen Pals dogs.  Lucian was released in 2015 and recently decided that now was the time he was ready to adopt.  Here is his story in his own words: 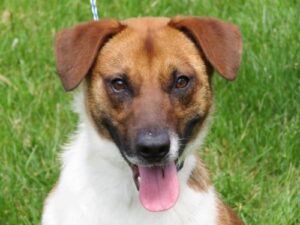 I was a handler at Deerfield Men’s Work Center. I entered the correctional system Sept. 9, 2009 and became a handler February 2013 until June 2014- when I left Deerfield for the work release program until I was released January 2015. I decided to become a volunteer with the program in July 2012 after I saw the transformation of one of the dogs from a scared timid pup into a confident well mannered companion. I was a volunteer from July 2012-Feb 2013 during that time I worked with and learned from the permanent handlers until I was ready to be a full time handler in February 2013. I had the privilege of training 7 different dogs during my 16 months with the program. Sochi, an energetic 6 month old boxer/beagle mix was my first dog- she taught me so much patience and in a big sense trained me. Next was Phoebe, a year old Aussie Kelpie/Cattle dog mix- she was a calm intelligent and athletic one. Then Prince Bailey II he was a nice lap dog and a silly playful boy. By the time I got Naya, an awesome frisbee catching Shepard mix who passed the CGC (Canine Good Citizenship) in a then record 2 1/2 weeks in the program, I felt like a much stronger trainer thanks to Virginia and Katie and my fellow handlers. Poppins was my next project- she was a beagle mix and a handful- again a lesson in patience and understanding. Then there was Brie- a pit bull mix and hands down my favorite dog- I had her for about 5 months and I bonded so closely with her that it was hard to give her up when she got adopted. Lastly but not least-ly Domino a border collie-Shepard mix who was rescued on the side of the road by Katie- we picked at least 100 ticks off of him and his brother Lucky. 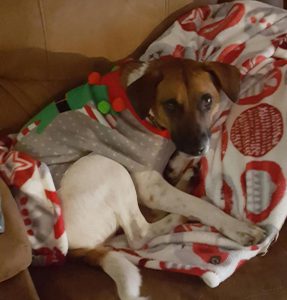 He was the culmination of everything I learned in the program and was one of my smartest dogs. I ran into Lucky back in July 2016 in my neighborhood in Richmond (small world) and it was a sign to reach out to the program to adopt, which I had already planned to do when I had Brie. My friend and Dog Son Trevor has been the best dog in the world!! His training has lined up perfectly with the skills that I learned from the program. 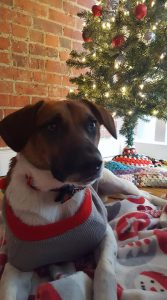 We connect on that level. His transition was almost seamless I think because of that. I could tell that he was comfortable with me almost immediately and I believe partly that is because I use the same techniques as his Pen Pal trainers, who did an amazing job with him. I have seen the spectrum of well trained dogs and not so well trained dogs and I can honestly say that Trevor was extremely well trained. I know the passion and patience it takes to train a dog while locked up- you are in your darkest moments at times and these dogs become the light in your life. Trevor is mine and Sarah’s new light now and I am so thankful to the Pen Pals program and his trainers/handlers. No dog is beyond saving and neither is a human.