It’s love at first site when it comes to Pudgie, the 12-year-old male pug. Everyone who meets him can agree that his sweet face will make any day seem a little brighter.

His parents, Erin and Daniel Mackay, dote on him like all pet parents should, and lovingly refer to him as Pudgie the Pugtato, or just Pudge. When you take one look at the three of them together, you can tell that Pudgie is adored. 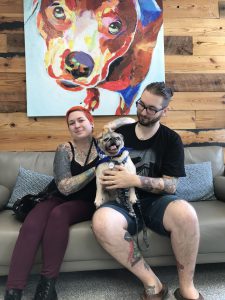 Erin Mackay first got Pudgie when he was a baby and she had just graduated high school. In the years that followed, Pudge provided Erin with the support and drive she needed to overcome some of the most difficult times of her life thus far. Pudge was an anchor for her through painful personal battles and struggles with her health. And just as Pudge was always there for her, Erin made sure she was always there for him, even in the worst of times.

Shortly after meeting her husband Daniel, Erin told him, “Pudge comes first, always.” Daniel, who is now the Manager of Animal Care at the Richmond SPCA, replied, “Fair enough,” and the rest is history.

He recalls when he first met Pudge about ten years ago and how he immediately jumped into his arms to furiously kiss his face. That’s how Pudge is; he makes new friends with everyone, everywhere.

Since then, Erin and Daniel have been devoted pet parents to Pudge. They have celebrated him for being a source of comfort, laughter and so much more. He was at their wedding and has been a welcoming ambassador to all of the rescue fur babies and foster babies that have entered their home.

He has been there through it all. Pudge is the heart of their family. 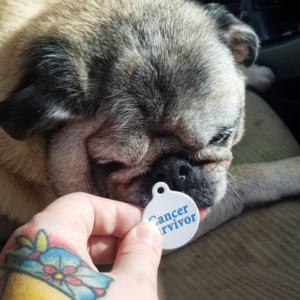 After showing signs of muscle atrophy and having difficulty eating and drinking, Pudgie was diagnosed with a tumor on one of his cranial nerves on August 3rd, 2017. Erin and Daniel were told that, without radiation, their Pudge only had 6-12 months to live. As you can imagine, they were devastated.

However, a referral to The Oncology Service in Richmond gave them a sense of hope. During their visit, they were given more information about FETCH a Cure’s Companions in Crisis program, which provides financial assistance to help families pay for life-saving treatments for pet cancer.

After completing their application and sharing their story, it became clear that they were a perfect fit for the program. Now, after three rounds of radiation treatment and several follow-up appointments, Pudgie the pug is cancer free!

At FETCH a Cure, it is our hope to defy the odds when it comes to feline and canine cancer and to give more families and pets quality time together. The Mackay’s story teaches us that we often need our pets as much as they need us. We hope to lengthen these unbreakable bonds for as many pet owners as possible. Please consider making a donation or joining us at one of our upcoming events to make a difference in a pet’s life today.