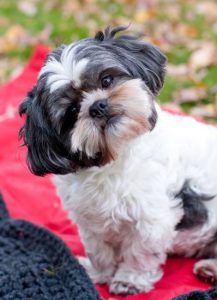 “Murphy Brown came to our family through Giles County Animal Shelter in June of 2006 after being found roaming a Pizza Hut parking lot. We should have known then that Murphy’s two loves would be food and self-guided tours.

Murphy loved his cheeseburgers and didn’t discriminate. You could find him dining at McDonald’s or the Home Team Grill and FW Sullivans in the fan or The Grill on Patterson when the weather was cool. During Murphy’s life, he traveled with our family quite frequently – visiting Washington, DC, the beaches of Bald Head Island, NC and Virginia Beach, along with the mountains of Charlottesville and Narrows, Virginia.
Murphy enjoyed being with his people more than anything in the world. We found that out when Murphy was diagnosed with Lymphoma in October of 2014. After a visit to River City Veterinary Hospital and the NC State Veterinary Medical School, we learned that Murphy Brown had B Cell Lymphoma and only had 4 – 6 weeks to live without treatment. Murphy went to weekly chemotherapy for months and lived an entire year cancer free. When he came out of remission in November of 2015, he fought like a champ. Never complaining about being picked and prodded because he loved seeing his girlfriend Katie at TOS every week. 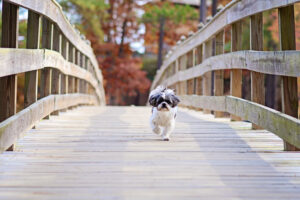 Murphy fought until the end – which was August 7, 2016. He gave us the gift we’d hoped for during this horrible journey, which was the gift of passing away at home on an early Sunday morning when his little body just gave out. The saddest part to our family is that Murphy was just 24 hours away of being enrolled in a trial at the University of Pennsylvania. Our hope is that any family faced with a cancer diagnosis for their pet will partner with their medical team to identify what treatment and trial options are available. The timing didn’t work out for Murphy Brown, but we pray it will for other sweet puppies and kitties fighting cancer.

In an effort to raise awareness of treatments and FETCH a Cure’s mission, we hosted the first annual Murphy’s Mile walk at University of Richmond on Saturday, October 8th. The UR lake was Murphy’s favorite place on earth, and even Hurricane Matthew couldn’t keep Murphy’s fans away. 65 people joined together, walking in his memory, with a commitment to find a cure for canine cancer.”